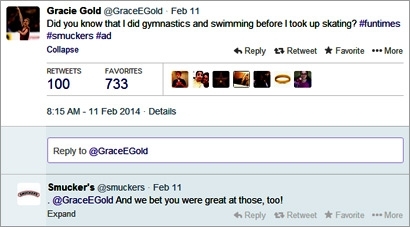 Those seemingly spontaneous and personal tweets made by athletes at the Olympic Games may not be so spontaneous, personal or even personally posted after all. Several athletes at the Games, working through their agents, are tweeting on behalf of sponsors via their own feed. According to a report from AP, figure skaters Ashley Wagner and Gracie Gold are posting some messages drafted by sponsors. The IMG agency says this is the first Olympics where athletes had a schedule of sponsored social media postings.

According to the report, sponsors pass along to the agents a set of posts that the athletes then post themselves or in some case have posted by their representatives. The larger sponsorship deals these athletes have often include a certain number of Facebook or Twitter mentions and Instagram images.

The agents are not specifying which brand mentions have been on behalf of sponsors. We found one post from Gold that referenced her past history as a gymnast and swimmer and then dropped #smuckers and #ad hashtags. Smuckers replied to the post. The Associated Press noted mentions in athlete feeds that include Olympics sponsors such as Cover Girl, Visa, United Airlines and Pandora Jewelry.

An IMG executive says that sponsors do not consider retweets of a sponsor message satisfactory. The sponsored tweet must come directly from the athlete.