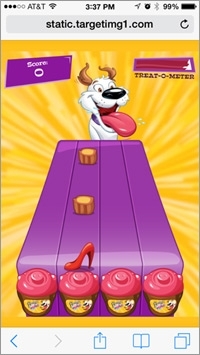 The retail marketing partnerships that used to be mainstays of end caps, circulars and TV spots are following the mobilized user into the gaming genre now. Last week Target launched a Web app game aimed at devices on behalf of Purina PetCare Company. And it won’t be the last. The PopIt game features the widely advertised bacon-flavored dog treat Beggin Party Poppers. Players tap away foreign objects from four conveyer belts carrying Party Poppers to their rightful place in their distinct red-top containers. The app also rewards players with a coupon via an SMS exchange with Target.

According to the TwinCities Business Report, from Target’s hometown in Minneapolis, the retailer is planning more than half a dozen such mobile games for marketing partners this year. The company first tried the model during a campaign coinciding with the 2013 Super Bowl that featured a number of partner brands. It claims that the game had a 50% replay rate. At the Target blog, head of the mobile team, Dawn Block, says: “We’re really focused on creating great games for guests that are simple, yet challenging enough to make you want to play again and again.”

In the new series of games, however, titles will be tied to specific products and especially around new product launches.  For Purina, the PopIt game is a test of how effective a mobile game can be in launching a new product.

It is not entirely clear how customers find their way to the Web game at www.target.com/poppers. Promotion for the game was not visible to us at either the Target.com home page or even at the pets section, on either desktop or mobile browsers.