Nutrition Label Reading Has Been Declining For Years 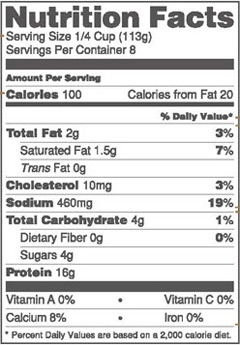 Nearly all parties concurred that the 20-year-old Nutrition Facts label needed updating, although there is much disagreement about which updates are needed.

As recounted by Marketing Daily's Thom Forbes, the Food and Drug Administration has now proposed such changes, which are bound to stir heated debate during the 90-day comment period ahead.

Meanwhile, The NPD Group offers some insights about consumer use trends related to nutrition labeling.

Survey data on consumers' eating and drinking habits gathered for more than 30 years by NPD's National Eating Trends service show that the percentages of American consumers who agree with the statement "I frequently check labels to determine whether the foods I buy contain anything I'm trying to avoid" peaked at 65% in 1990, after the Nutritional Labeling and Education Act was passed.

The percentage that agree with that statement dipped to 60% in 1994, shortly before Nutrition Facts labels actually began appearing on products, and rose to 64% in 1995, after the labels were on all food products that require them.

NPD's chief industry analyst, Harry Balzer, believes that the decline in reported nutrition label reading demonstrates not that the labeling is a failure, but that it has helped to serve its purpose of educating consumers. "After all, how many times do you need to look at the Nutrition Facts label on your favorite cereal or juice, or any other food you routinely consume?," he asks. (Research has consistently shown that most consumers largely buy the same products year after year, only occasionally trying a new one.)

On the other hand, Balzer says, "if the Nutrition Facts label is to continue to educate, it should allow for changes more often than once every 20 years.  For example, gluten, probiotics and omega-3 were not on the radar screen 20 years ago."

According to NPD Dieting Monitor data, the top five items checked by consumers who do read the Nutrition Facts label are calories, total fat, sugar, sodium and calories from fat.

But the new format would eliminate the total calories from fat information, on the grounds that fat calories are less important for health purposes than knowing a food's percentages of total fat, saturated fat and trans fats (information that would be retained from the original Nutrition Facts label).