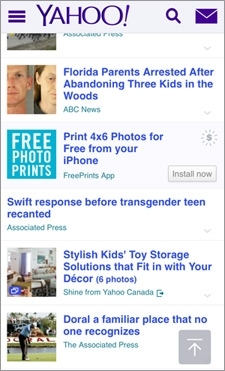 Yahoo is taking more serious aim at improving both its mobile monetization and its hold on audience data. The company started making moves this week to challenge Facebook, Apple and others in mobile app install ads. At the same time, it began removing the use of Facebook and Google log-in credentials for accessing Yahoo properties.

The company is rolling out its own app install ads, according to a report from AdAge. Using an in-stream native ad format that it has been deploying across its mobile Web and app properties, the portal is testing ad units that allow the user to go directly to an app install link from the ad. “The purpose of these native ads is to help brands drive downloads,” a Yahoo spokesperson told AdAge. The ads will appear on Yahoo properties running on iOS and Android, pointing to apps for the respective operating systems.

Yahoo is trying to tap into the revenue that Facebook, Google and Apple have successfully attracted to their in-app and online app install ads. Facebook famously succeeded in turning its share of ad revenue coming from mobile in short order, and many of those ads were in-stream units designed to drive game and other downloads.

At the same time that Yahoo is trying to increase its mobile ad revenue the company is tightening its hold on the customer data that helps drive targeting. The company will stop accepting the Facebook and Google login credential that it has offered users as a means to streamlining the sign-up and login process for sites and apps. According to a report from Reuters, Yahoo will force users of its services to log in using the Yahoo ID rather than the Facebook and Google credential that currently access the portal’s services like Flickr and fantasy sports. In fact, the new model will appear first in its Yahoo Tourney Pick’Em service.

By eliminating sign-in credentials from third parties, Yahoo is cutting Facebook and Google off from collecting user data from interactions with Yahoo properties. Yahoo appears to be asserting the authority of its own popularity with users and role in the digital ecosystem and compete more directly and openly with both Google and Facebook specifically.