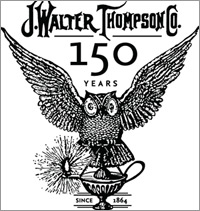 JWT turns 150 this year and has mapped out a year-long series of events to celebrate.

“JWT’s 150th is much more than just a birthday,” said Bob Jeffrey, the agency’s chairman and CEO. “This is a platform to galvanize our employees around our pioneering roots and spirit of inventiveness, and to share our mission with our clients and the world.”

The agency, which opened its doors on December 5, 1864, has expanded into a global network of 10,000 employees, spanning 200 offices and 90 countries. The agency was known as J. Walter Thompson, named after its founder James Walter Thompson, until 2005 when it rebranded to JWT.

“Every day is an opportunity to reinvent tomorrow, and together with our pioneering clients, we will continue to seize that opportunity for the next 150 years,” said Jeffrey.

Over the decades, JWT has maintained a number of the industry’s longest-standing client relationships, including: Unilever (109 years), Kimberly-Clark (84), Nestlé (81), Kellogg’s (80), Rolex (68), Ford (67), U.S. Marines (66), Johnson & Johnson (51) and Shell (49). Such relationships are tougher to maintain in today’s procurement-driven world, where reviews are often conducted by clients every four or five years.

The agency claims a number of firsts, including hiring the first female creative director and pioneering magazine advertising, as well being the first agency to expand overseas and the first to send a Kit Kat candy bar into space—a stunt that was tied to Felix Baumgartner’s 2012 sky dive from the edge of space.

To kick off the anniversary celebrations, the agency has unveiled a commemorative logo that revives the original historical mark from JWT’s earliest visual branding which featured an Owl and a Lamp. The owl, long a symbol of wisdom in many cultures, and the lamp, an emblem of light and clarity of vision, are designed to convey the thought that experience and knowledge lead to success, the agency said.

Also being planned is an internal contest called “The Commodore Challenge,” designed to elicit pioneering ideas, a Cannes seminar on pioneering and innovation and an influencer series with clients, JWT alumni and industry icons.

The agency is also establishing the Helen Lansdowne Resor Scholarship for female creatives. It is named after JWT’s first female copywriter. JWT Intelligence is planning a project on what an agency will look a decade down the road. Also in the works: an interactive historical timeline and a content series highlighting some of the agency’s best stories from around the world.