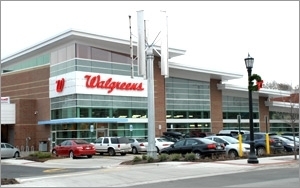 Walgreens says its second-quarter sales hit a record $19.6 billion, buoyed by strong prescription sales, and that its pharmacy continues to gain market share. Net earnings, however, declined slightly to $754 million, from $756 million a year ago.

“Our second-quarter performance, in spite of expected headwinds from slower generic drug introductions, comparisons with last year’s flu season and severe weather, was marked by solid top-line growth driven by record quarterly sales and record second-quarter prescriptions filled,” says Greg Wasson, president and CEO, in its release. “We also continued to gain prescription market share while we maintained a firm hold on our costs.”

The Deerfield, Ill.-based retailer also says it is up to 100 million members, with 80 million of them active, in its Balance Rewards loyalty program, and that its partnership with Alliance Boots is likely to beat its second-year estimate. In the first half of this fiscal year, it has achieved $236 million in synergies.

And in the first half of the year, it says it gave 8.6 million vaccines, an 11% gain from last year.

Meanwhile, rival CVS says it is creating a new rewards program for veterans, partnering with Veterans Advantage to offer an exclusive 20% discount program. Available to U.S. Active Duty Military, Veterans, National Guard & Reserve and their families, it offers 20% off purchases and free shipping for online orders.

"CVS/pharmacy is proud to honor military and veteran families with this new benefit for Veterans Advantage members, allowing them to access significant savings whether they shop with us in our stores or on CVS.com," CMO Rob Price, says in its release. "This program demonstrates our continued commitment to those who have given so much in service to our country."