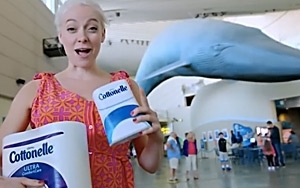 Jump or fail; don’t sweat the parachute because the plane’s going to crash anyway. Clive Sirkin, CMO at Kimberly Clark, wouldn't put it quite that way, but he would agree that marketers who stand still are marketers whose brands are in mortal peril.

Speaking at Ad Age's digital conference in New York on Tuesday, Sirkin began with a pre-apology because he figured he’d insult at least a few people in attendance. As he spoke about the insanity of marketing recalcitrance, it’s possible that he did, because when it comes to strategy, otherwise smart executives are still partying like it's 1999. "The investment in the status quo is massive," he said. "The world has changed and we have all the data to support it, yet we leave that conversation, come back to work, and still our behavior is guided by the TV world."

The auto industry got the insult. Sirkin ran a mashup of auto ads from 12 car brands cut together and he gave a running commentary on surefire cliches: "There's the car driving west to escape your shitty life; here’s the helicopter shot; the car on mountain road; there's the car doing spins, because you do that all the time, don’t you; and now we'll see the brand on the front of the car."

His take on what in corporate culture keeps brands so far behind and so apparently incapable of making change was that marketers are like trapeze artists unwilling to let go of the bar. "As brand-builders, we are suspended between two worlds and won't let go of the old one. Until you get the organization to accept that where you are is more risky than moving forward, you won't move forward, and by the time you do it's too late." For its part, per Sirkin, Kimberly-Clark has moved away from the TV upfront. "We are constantly reducing that commitment because our budget is defined by the program, not ads. It's based on the business need."

Financial commitment to massive, outdated structure, product strategy and culture has the black-hole effect of bending ideas and perception to fit the money pit and the old edifice, Kodak being Sirkin's poster child (although BlackBerry is a more recent one.)  "The investment was so massive [in the old business model] that they couldn't see what was hiding in plain sight. You have to dismantle the status quo and change the KPI, tools and structure. One nice analogy was a guy crawling around in the bushes at night looking for his lost car keys, even though he knows he dropped his keys elsewhere. But he's looking where the street lamp is shining. "We can't see where we are supposed to go, so we naturally go where data is."

Another problem: "expertise" that encourages jargon, complexity, specialization, fear and silos. The result: disenfranchised and disenchanted marketers who are far less likely to try anything new. "Digital ninjas are just talking to themselves, and [marketers] who need who know where to go don't know what they’re talking about, but won't say that. We need to start talking simple English and make it accessible. We have made this hard. If we want to get to the place where we need to be, we have to make it simple."

He also suggests getting rid of terms like “digital marketing,” “content marketing,” and “CRM marketing.” “Each time something new comes we separate it and create a silo. All we are doing is separating and separating. We don't call it 'TV marketing,' or 'print marketing.'"

Whatever gets bolted on as an adjunct because it is considered a media-specialized marketing program gets killed first if the ROI doesn't seem to appear. "We need to converge and aggregate. You have the responsibility to enforce that."