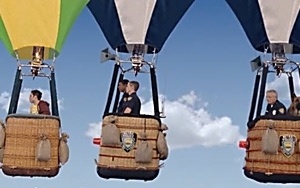 The TV spot, dubbed "Air Chase," plays on the light-and-airy theme by showing a young man in a hot air balloon clutching a stolen box of the chips, attempting a less-than-speedy getaway from police in hot pursuit of the snack -- also in hot air balloons.

The ad is the latest in a series of offbeat spots from TBWA's Being New York agency for the brand's "Must! Have! Wheat Thins!" campaign, which is being adapted for a rapidly expanding number of new varieties.

Osbourne was chosen to represent the popped chips -- which are being positioned as "the ideal option for those interested in mindful snacking" (10 grams of whole grain and 120-130 calories per 30-gram serving) -- because she's a fan of Wheat Thins and "a respected trendsetter who has recently undergone an amazing lifestyle transformation," said Wheat Thins Senior Brand manager Deepti Shrivastava.

Osbourne will be on hand for a launch event on April 9 in New York City's Times Square, featuring an interactive Wheat Thins Popped sculpture made from more than 400 balloons. Starting at 1 p.m. EST, fans around the world can help pop the balloons by tweeting using the hashtag #PoppedWheatThins. The balloon popping will be followed by a snack break/sampling event at 3 pm.

Wheat Thins' social media efforts for the launch include a "Pop Before We Pop" contest on Twitter, leading up to the April 9 event, in which consumers tweet and retweet to vie for pop-themed prizes (like a pop-up tent).