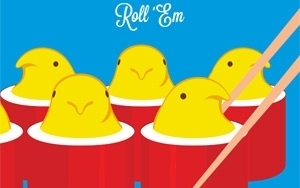 Easter is the best-selling season for Peeps candy, and now, The Terri & Sandy Solution, a strategic and creative advertising boutique agency and the new Agency of Record for Just Born Inc.'s Peeps brand are launching an integrated Easter campaign.

The multi-media campaign debuts April 14 with digital initiatives and TV spots, as well as static banners that will run on Facebook.

“The campaign is born out of the existing Peeps social media phenomenon,” says Sandy Greenberg, Co-founder, TTSS. “When you search for Peeps online, you quickly discover thousands of ways fans interact with the brand.”

Ultimately, the campaign will evolve based on viral chatter. Although the campaign is running across traditional channels, the focus is on social media. After all, Peeps is a brand whose popularity is rooted largely because of its online fans. “There is already a huge conversation about Peeps going on socially. We wanted to ignite even more engagement,” says Terri Meyer, TTSS’ other Co-Founder.

The campaign also plays upon the fact that many fans consume Peeps in non-traditional manners. “Consumers craft, bake, decorate, demolish and, of course, eat Peeps in many unique ways," says Greenberg. "In fact, about thirty percent of Peeps sales are attributed to activities outside of eating.” As such, each ad showcases Peeps as cookies, roasted, and even smashed.

The agency has done of lot of work focused on those with a sweet tooth, which is credited with helping the shop recently win the Peeps/Just Born account. Previously, the team developed campaigns for Mars, Campbell’s and Kraft, including “Milk’s Favorite Cookie” campaign for Kraft’s Oreo.