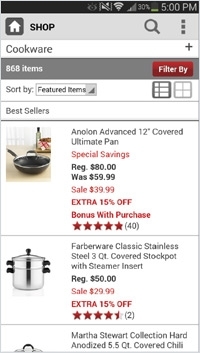 One takeaway that quickly emerges from a new Forrester report on the best and worst of mobile is that retailers and brick-and-mortar companies are clueless about mobile compared to their digital- or mobile-only counterparts.

The former are often used in the study authored by analyst Deanna Laufer as examples of what NOT to do in mobile, while the mobile natives represent the best of what’s out there. This is pretty much what you’d expect, given that companies like Flipboard and Shazam were built from the ground up as mobile experiences. If their apps fail, they fail.

The stakes for traditional publishers and retailers in mobile may not be as high, but they continue to rise as people access their devices increasingly for shopping and consuming media. Publishers in particular have seen a big impact from mobile, with a third or more of their traffic coming from smartphones and tablets.

What are the best mobile properties doing better than the rest? Delivering clear value, optimizing efficiency to suit the nature of the medium, and simplifying the presentation. If providing a smooth, reliable performance is a basic expectation of value, then the Duolingo language app is fluent in mobile.

By contrast, Hilton Worldwide’s HHonors app gets dinged for stalling during searches, while Capital One’s ShareBuilder app is singled out for failing to even load when tested. Similarly, Fab.com’s app showed streamline product listings and information while product pages on Macy’s app were crowded with text and didn’t prominently display  an “Add to Cart” button prominently

The report offers a number of other best/worst examples like this, with companies such as Best Buy, Staples and Toys “R” Us cited for falling short in ease of navigation and their ability to streamline how information is presented on mobile phones. Not all brick-and-mortar retailers are put in Forrester’s hall of shame.

7-Eleven earns praise for providing offers relevant to location, weather and time of day, while Home Depot is cited for giving users three ways to search for products: by typing in keywords, using voice recognition or scanning a barcode. The options recognize the challenges of typing on small screen.

Not all pure-play mobile companies escape criticism, either. Fancy, which prides itself on letting users discover and buy crowdsourced goods, was slammed for requiring people to sign in before being able to browse. Still, traditional company apps catch most of the flak. Given that most of these companies have the resources to build robust mobile apps and Web sites, it’s more a matter of their priorities.

If retailers are still seeing the vast majority of their e-commerce sales on PCs, ramping up the mobile presence may still not be as much of a priority. But that could change not only as m-commerce grows, but in-store tools like shopping beacons and mobile payments capability spread.

In that light, retailer apps have a bigger challenge because they have to function as a link between the digital and physical world. But first they have to get the basics right before adding more complex features.