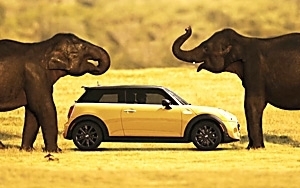 The Mini Cooper has always had passionate drivers who love their cars both online and offline. Now, full-service agency BSSP and the car brand are forming a closer relationship with these fans with the integrated "Final Test Test Drives" initiative.

This campaign will culminate on April 16th at the New York Auto Show when Mini Cooper executives unveil a new model with fan-suggested design features and the “fan favorite” of its “Final Test Test Drives.” Additional advertising and events will run through the year in support of the new car.

“There’s nothing more powerful than a loyal and dedicated owner when it comes to Mini,” says John Butler, Executive Creative Director, BSSP. “The Mini brand has ongoing engagement with its owners, and in turn we use that both as a strategic advantage and creative starting point in marketing Mini. Our challenge is to find new ways to get the Mini community excited. This new initiative has exceeded expectations.”

The campaign is promoted through a partnership with Hearst Men's Group, and its publishing titles Road & Track, Car and Drive, Esquire and Popular Mechanics. As part of the collaboration, the Hearst Men's Group filmed four videos starring Adrian Simpson, former host of the BBC's "Top Gear" and "Fifth Gear," to complement the series.

Last year, the "Final Test Test Drives” competition kicked off by seeking design suggestions on what Mini drivers would like to see in the new Mini Cooper hardtop. More than 800 Mini owners out of 200,000 registered owners submitted ideas.

Then, BSSP and Mini awarded 10 entrants with the ultimate test drive experience and the opportunity to see their concepts become real. At the same time, production company Tool of North America turned these 10 winning concepts into short original films. Supporting the films are advertising from BSSP across multiple channels including television, outdoor and events.

In addition, taking the input from its owners one more step, Mini then turned some designs and ideas into actual features that it is making available as ‘New Originals” custom options packages on select cars. Interactive and design agency Beam Interactive developed a digital experience to showcase both these option packages as well as their winning inventors.