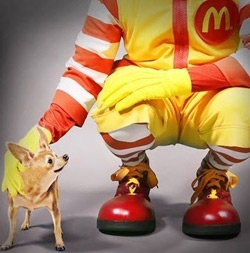 Taco Bell appears to have gotten the attention of consumers, at least in the short term, with its new breakfast menu and TV spots humorously taking on McDonald's.

Taco Bell's perceptions among fast-food consumers rose between mid-March and early April, while McDonald's' declined, according to YouGov BrandIndex.

As of April 4, Taco Bell, which confirmed in late February that it would launch its new breakfast menu on March 27, had reached its best perception levels with consumers who eat at QSRs since last September, while McDonald's' levels were at their lowest since the end of last November.

McDonald's and Taco Bell were measured with two of BrandIndex's daily scores: Buzz, which asks respondents "If you've heard anything about the brand in the last two weeks, through advertising, news or word of mouth, was it positive or negative?"; and Impression, which asks "Do you have a general positive or negative feeling about the brand?" All respondents were 18 and over, and had eaten fast food at least once in the past six months.

On the Impression measure, between February 1 and April 4, Taco Bell's score started at 23 and fluctuated relatively little (between about 22 and 24), ending at 24. McDonald's' started at 27 and declined fairly steadily during the period, to 19 as of April 4.

However, YouGov BrandIndex reported that McDonald's' Impression score rose slightly, to 20, on April 5. (It did not provide daily scores for the two QSRs beyond April 4).

On March 28, the day following the launch of Taco Bell's first "Ronald McDonalds" breakfast ad, McDonald's launched a limited-time free-cup-of-coffee offer and used Facebook to post an image (shown above) of its iconic clown icon petting a Chihuahua (Taco Bell's former mascot), with the message: "Imitation is the sincerest form of flattery."

Of course, while grabbing attention with its "disruptive" ads is an important first step for Taco Bell, its breakfast items will have to prove a real hit with consumers to persuade them to change their longtime habits and make a dent in McDonald's' 30%-plus share of the breakfast market.