For JWT, It's Back To J. Walter Thompson

For JWT, what’s old is new again. The agency has confirmed that it is re-embracing the name it had used for most of its 150 years in business—J. Walter Thompson.

The agency officially adopted the JWT moniker, which for years had been the way that many people referred to the shop, in 2005.

"Throughout our history, JWT has been synonymously referred to as both JWT and J. Walter Thompson,” said the agency’s chairman and global CEO Bob Jeffrey. “The two monikers peacefully coexisted, in the press, in our own internal communications and by the industry at large.”

However in planning for the agency’s 150th anniversary this year, added Jeffrey, “it became abundantly clear that the world and our younger employees in particular, had a deep appreciation and hunger for brand authenticity. So, we embraced this and brought back a commemorative logo — the Owl and the Lamp — for 2014. At the end of 2014, on December 5th, our official birthday, we will return to the J. Walter Thompson name."

The agency hadn’t actually planned to announce the name change until later in the year. But the New York Times reported that Martin Sorrell, CEO of JWT parent WPP spilled the beans at an industry function earlier this week.

Last month, the agency unveiled a series of activities that it is planning this year in recognition of its 150th anniversary, including the use of a commemorative logo derived from the shop’s original “Owl and Lamp” logo. An agency rep said the firm has not yet decided on a permanent logo for use beyond its sesquicentennial year. 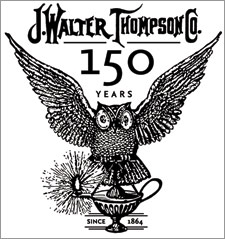 advertising, agency, branding, creative
1 comment about "For JWT, It's Back To J. Walter Thompson".
Check to receive email when comments are posted.
Next story loading