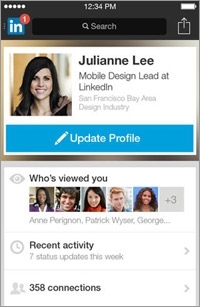 LinkedIn on Friday announced it has surpassed 300 million active members worldwide, up from 277 million at the end of 2013. The roughly 36% growth rate in the first quarter from a year ago is on par with 2013. The professional networking site said 67% of its users come from outside the U.S., with more than 100 million in the U.S.

“While this is an exciting moment, we still have a long way to go to realize our vision of creating economic opportunity for every one of the 3.3 billion people in the global workforce,” stated Deep Nishar, LinkedIn’s senior vice president of product & user experience, in a blog post.

Mobile has become a growing focus for LinkedIn in the last couple of years, as more users access the service on devices. Later this year, Nishar noted that LinkedIn will hit the point where more than half of its global traffic comes from mobile.

“Already, our members in dozens of locations, including Costa Rica, Malaysia, Singapore, Sweden, United Arab Emirates and the United Kingdom, use LinkedIn more on their mobile devices than on their desktop computers,” he wrote.

Overall, the site each day gets an average of 15 million profile views, 1.45 million job views and 44,000 job applications in over 200 countries through mobile. As the company expands its mobile portfolio, with new releases such as its slideshare app, LinkedIn plans more strategic partnerships with major mobile players like Apple, Nokia and Samsung.

LinkedIn made a splash earlier this year with its push into China. In his post, Nishar said the goal now is to connect more than 140 million Chinese professionals with each other and the worldwide work force.

In a research note on Monday, however, analyst Michael Purcell of Stifel Nicolaus pointed out that LinkedIn still monetizes international users per member at one-third the rate of their U.S.-based counterparts. That translates to average revenue per user (ARPU) of $3.76 abroad versus $11.30 in the U.S.

LinkedIn is also playing catch-up in monetizing mobile usage at the same rate as on the desktop. To that end, it began rolling out its mobile-friendly Sponsored Update ad unit last year across the desktop and mobile. Since advertising is not the company’s primary revenue source, LinkedIn has not been under the same pressure to extend its ad business to mobile as a consumer-focused social network like Facebook.

LinkedIn on Friday also released an infographic highlighting some of the changes within its membership in the last five years. For instance, LinkedIn, on the brink of getting more than 50% of its traffic from mobile devices, launched its first app just over five years ago for a small subset of mobile users.

Women are closing the gender gap in membership -- accounting for 44% of users, up from 39% in 2009. And while the U.S. still has the most LinkedIn users of any country, membership has risen sharply internationally, with India and Brazil moving into the top three.

The LinkedIn announcement comes about a week before it releases first-quarter earnings on May 1. Wall Street analysts on average expect the company to report a profit of 35 cents a share on revenue of $467 million.