Available Inventory, Clicks And 'Premium' All Growing In Mobile

Vserv.mobi, a mobile ad network that has recently repositioned itself as a mobile ad exchange, on Wednesday released some data on the “state of [its] exchange.”

Keep in mind this is just one exchange -- and one that has only supported real-time bidding (RTB) for about a month -- but the mini report gives us a good look into the type of growth mobile is seeing.

Vserv says that in the past year, its amount of inventory has increased by 82%. The company says 14% of the ads on its exchange are now available for RTB. We can surmise that figure will grow, considering that the company's RTB platform has only been around for a month.

The importance of clicks has been debated -- with some saying click rates are all but worthless because of fraud issues -- but I do think it’s noteworthy that the rate at which clicks have grown in the past year has exceeded the rate of new inventory, at least for Vserv. 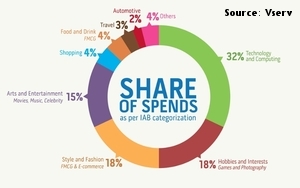 Tech and computing-related ads dominate on the Vserv mobile exchange, accounting for 32% of the spend. Hobbies & Interests -- in which games are included -- accounts for 18%. Style & Fashion accounts for another 18%, while Arts & Entertainment sees 15% of the share.