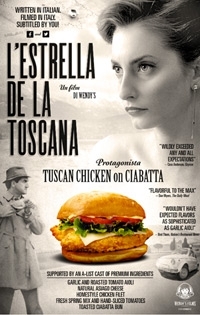 To promote its Italian-inspired Tuscan Chicken on Ciabatta sandwich, Wendy's came up with an intriguing alternative to catchy, short videos or the now-familiar tactic of contests inviting fans to submit their own videos.

Wendy's and agency VML not only created a 7-minute-long, black-and-white film that's a spot-on homage to classic Italian cinema of the '60s (Fellini's "La Dolce Vita, in particular); the ambitious video was designed as a platform to let fans play "screenwriter" by writing English captions for the actors (who are speaking Italian in the soundtrack).

The actual footage isn't a send-up or a parody; Wendy's is relying on its fans to supply the humor with their captions, notes Chris Corley, group creative director at VML.

"Today, it's not enough to just tell stories, especially in digital," Corley stresses. "You have to give your audience a chance to be a part of the story, to tell the story themselves. Because that's what they're doing on social channels every day: Telling their own stories.

Wendy's first posted a one-minute "trailer" on YouTube and its Facebook and Twitter pages on April 21, previewing scenes from the short film and explaining the contest. Since then, it has posted three different clips from the short film with call-outs encouraging fans to post or tweet captions for each.

The authors of the captions that are chosen to be used as subtitles in the finished film will be given a credit at the end of the segment of the film in which their captions appeared.

In addition, each author will get a credit as a "screenwriter" -- basically honorary bragging rights -- on a special page on the IMDb site, set up through a Wendy's media buy with IMDb. According to VML, Wendy's is the first non-entertainment brand to have a similar page on IMDb, and its video is the first on the site to feature user-generated subtitles.

In addition to promotion on the social media assets and IMDb, the campaign is being supported with Ebuzzing ad units on a variety of Web sites. The formats allow users to write and submit captions right in the ads.

In their first two days since being posted, the first two video segments have drawn more than 600 comments/caption entries and more than 130 shares on Facebook, and more than 100 caption tweets and retweets and 300 "favorites" on Twitter. (The third segment was just posted Thursday.)

On Facebook, Wendy's has responded to some of the more clever caption entries with comments requesting the authors for permission to use (or possibly use) those captions in the film.

For example, for one clip showing a beautiful woman looking into a makeup compact and seeing the face of a man named "Don Carlo" appear, a fan suggested "Why do my selfies always end up looking so terrible?," and another suggested: "Why didn't you guys just issue me an iPhone?"