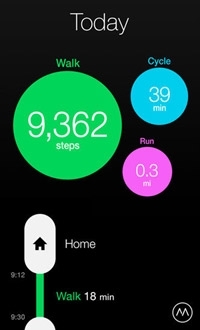 As Facebook recasts itself as a mobile company and app developer, it's ramping up its push into mobile location. That was highlighted Wednesday by its acquisition of the startup behind the fitness tracker app Moves. (Details of the transaction were not disclosed, but let's figure it was less than the $19 billion laid out for WhatsApp.)

A description of the app's geolocation features indicates what may have attracted Facebook. Running in the background of your smartphone, Moves keeps track of activities like walking, cycling and running. It also tracks the places you go each day -- think commuting, eating out, shopping -- to create a visualized daily “storyline” of your daily life.

That kind of information would provide a real world parallel to the personal data Facebook collects about you from your timeline to create a more complete digital profile to better target ads to you and millions of others. Check that -- Facebook yesterday said it now has more than a billion monthly mobile users worldwide.

Exactly what the social network plans to do with this technology is not clear. In announcing its acquisition by Facebook, two-year-old startup ProtoGeo Oy said Moves will remain as a stand-alone app.

But the company's blog post also stated that the Moves team was joining Facebook “to work on building and improving their products and services with a shared mission of supporting simple, efficient tools for more than a billion people.”

In light of Facebook's strategic shift to create a series of stand-alone apps itself, like Paper and Facebook Messenger, it could put the Moves crew to work on a new location-focused app. The company seems to have taken a renewed interest in the category lately, with last week’s rollout of Nearby Friends, a feature that notifies users when friends are nearby or on the go.

The company said it would not use the service to target ads for now, but Facebook COO Sheryl Sandberg yesterday said during the company's earnings call that data from Nearby Friends -- like other information on the site -- would be used “make things more relevant, including relevant ads.”

Everything on Facebook gets monetized over time. That said, the company doesn't have an illustrious history when it comes to location services. When it introduced Facebook Places in 2010, many predicted it would wipe out Foursquare before the feature was killed off a year later.

But as it becomes more mobile-centric, it's hardly surprising that Facebook wants to play a bigger role in the location space. At the same time, it will have to tread carefully, given its history of privacy issues and its 2011 consent decree with the Federal Trade Commission. Facebook has emphasized, for example, that Friends Nearby feature is optional and offers user controls.

Even so, the step raised privacy concerns about how Facebook will end up using location data collected. Few are likely to relish the idea of Facebook tracking their every move in everyday life in addition to following their travels across the Web.