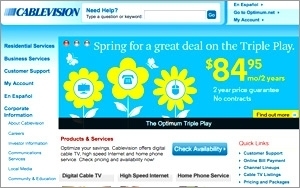 American Express will be the first advertiser to avail itself of the new interactive platform, called CloudTV AdCast. Cablevision will offer up a trial for other advertisers in the coming year.

The cloud-based platform, which allows delivery of HTML5-written interactive ads, simplifies interactive advertising efforts. Now these ads can be served across any number of set-top boxes -- long a problem among those interactive TV advertising platforms, when it comes to the diversity of technologies, memory capacity and TV remote controls.

“Pay-TV’s efforts to scale interactive TV advertising repeatedly have been hindered by the fragmentation and limited resources of the millions of existing set-top boxes,” stated Jeff Miller, president/chief executive officer of ActiveVideo.

This has meant a cumbersome task for marketers in re-writing/configuring creative for each set-top box.

Although ActiveVideo made an early deal around the Consumer Electronics Show for its cloud-based system with over-the-top set-top maker Roku, Murali Nemani, CMO of ActiveVideo, says “the real relevance is with the pay TV operators, whether as part of an [interactive] channel lineup, or a trigger off of a 30-second commercial.”

In one early trial with American Express and Roku, Nemani touts that the average duration of consumer engagement with the interactive ad experience was 10 minutes. HTML5 is increasingly the platform used by advertisers for their digital creative executions.

Cablevision will also be able to glean data insights in the deal, including effectiveness of ad buys, viewer engagement, response rates and conversion.

“Simplifying the process for advertisers to extend interactive ads to television is a key objective for Cablevision,” stated Ben Tatta, president of Cablevision Media Sales.