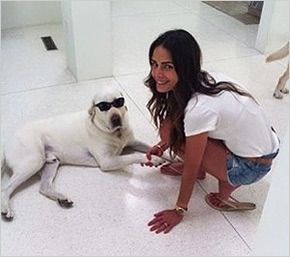 The game ends at 3 p.m. ET on June 3. Users are limited to one game play per day.

Purina will help adoptable pets by donating 10 cents to Adopt-A-Pet for every valid Paw It Forward Instant Win Game play, subject to a minimum of $30,000 and a maximum donation of $50,000.

Brewster, a pet lover, is the star of the “Fast & Furious” movie series and TNT's “Dallas.”

"The Paw It Forward movement is all about helping pet lovers connect to one another and share their love with animals in need, and Jordana is the perfect person to help kick off the effort," says Gordon Wade, director of marketing for Purina, in a release.  "She clearly cherishes the bond she has with her own pets, and shares Purina's passion and belief that pets and people are better together."

Brewster will host a Twitter chat on May 15. Pet owners can learn more about the campaign and participate in the conversation by following #PawItForward.

During the month of May, pet owners can also find daily tips for celebrating National Pet Month with their own four legged friends on the Web site.