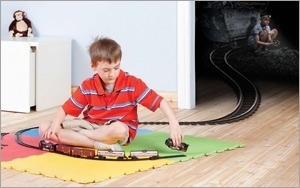 This week, kbs+ Toronto, part of MDC Partners, and the not-for-profit World Vision are launching the NoChildForSale campaign in Canada to raise awareness about childhood slavery.

The concept features three TV spots set to familiar lullabies that depict happy childhood memories that are then juxtaposed with those of a child slave.

Hence, the vivid comparison of a happy childhood with the realities of child slavery are intended to jolt viewersand serve as a necessary call to action for Canadian consumers to sponsor a needy child through World Vision.

"This year, we wanted to attach World Vision even more closely to the issue and its solution," says Marie Magnin, group account director, kbs+ Toronto. "So a special effort was made to increase the prominence of the brand across all tactics and enhance the content on the Web site to establish World Vision as a leading child well-being organization."

Print, digital, and social initiatives will serve as additional call-to-action directives and include a new campaign hub on NoChildForSale.ca, digital advertisements, static and video infographic content.

kbs+ Toronto led the creative strategy, execution and media planning for all television and print components. Real Interactive is responsible for the digital and social strategy and creative execution.

This year, the campaign plans to harness this awareness to move Canadians to action. World Vision is a Christian relief, development and advocacy organization dedicated to working with children, families and communities to overcome poverty and injustice in nearly 100 countries. Even though the organization has a global footprint, there are no current plans for this campaign to be used outside of Canada.