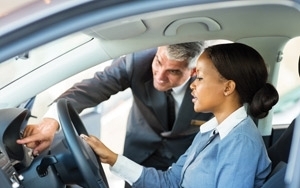 The evolution of the U.S. demographic profile kind of looks like what has happened to the U.S. auto market over the past 14 years, but in slow motion: whites (Euro-Americans?) are -- like the former Big Three -- shrinking in share while the imports are gaining. Pew Research estimates that by 2050 or so, those of European provenance will be 47% of the population, versus 67% now. Hispanics will be about 30% of the population, African-Americans 13% and Asians about 9%.

Although Asians (heterogeneously speaking) are under 5% of the U.S. population, they are the best-educated and most-affluent subgroup of Americans. Their numbers grew 43% between 2000 and 2010, per U.S. Census statistics, as did the number of Hispanic Americans in that period.

Car marketers, take note: Strategic Vision diced its 2014 New Vehicle Experience Study around similarities and differences of various ethnic groups to get a bead on which brands are popular with Asians, African-Americans and Hispanics. The review is based on over 525,000 respondents who self-reported their ethnicity.

While Honda, Toyota and BMW all were most likely to be “definitely considered” in a future vehicle choice across the three ethnicities in Strategic Vision’s study, the magnitude of their consideration varied drastically by ethnicity. For African-Americans, BMW was the brand most often cited as a future vehicle choice. Thirty-seven percent of study respondents who identified as African-American said they would definitely consider a BMW. The U.S. industry average was 23%.

For future "definitely would consider" brands, BMW, Honda, Lexus, Toyota and Mercedes-Benz were the top five brands for African-Americans. Toyota, Honda, BMW, Mercedes-Benz and Audi topped out for Latinos. For Asians, the top brands were Honda, Toyota. Lexus, BMW and Mercedes. By contrast, the entire market -- regardless of ethnicity -- awards Honda and Toyota the number one and two positions, respectively, followed by Ford, BMW and Chevrolet.

Looking forward, things change. The directional picture brings in other brands. To get a perspective on where auto brand share among the three groups might be heading, the firm took current market share of each brand among Hispanics, Asian Americans and African-Americans, and indexed those numbers with sales growth for the groups versus sales growth in the general market.

From that perspective, Dodge, Nissan, Chrysler, Cadillac and Kia enjoy the best outlook in the African-American market; Nissan, VW, Dodge, Honda and Hyundai lead for Latinos; and BMW, Lexus, Mercedes, Toyota and Honda have the top share among Asian Americans.

Strategic Vision also looked at emotional and practical auto attributes. Shared by Asian Americans, Latino Americans and African-Americans is the desire to have a vehicle that's "cool," the second-most-indexed images for a vehicle purchased by all three groups. Family oriented, powerful and classy are the top image drivers, respectively, for the three groups.

"African woman buying a car at dealership" photo from Shutterstock.