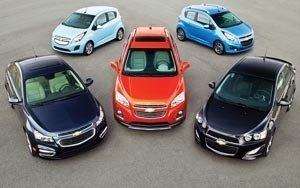 Market observers have been hinting for days that this would be a huge month for auto sales. And they were right. And that's especially good news for GM.

Apparently recalls haven't yet had a huge impact on its sales numbers. GM said it had its best May in seven years, posting deliveries of 284,694 vehicles -- up 13% versus the year-ago month. With fleet sales taken out, the company reported a 10% increase in retail.

“The momentum we generated in April carried into May, with all four brands performing well in a growing economy and 17 vehicle lines posting double-digit retail sales increases or better,” said Kurt McNeil, U.S. vice president of sales operations.

Chevrolet car sales were up 26%, and Buick sales were up 11%, giving it its best May since 2005. Both Cadillac and GMC had their best May total and retail sales since 2007, per the company.

"Despite the overwhelming amount of attention placed on the GM recalls in May, car shoppers don't seem to be holding anything against GM brands,” says Edmunds.com senior analyst Jessica Caldwell.

Many people may not realize that GM is the parent company of these brands. She speculates that sales of Cruze, which were strong in May, may be in part driven by trade-ins of recalled Cobalts. After all, getting people into showrooms and treating them well when they're there (which recent studies have demonstrated that GM dealers have done exceptionally well) is half the battle.

"I think any good dealer tells you challenge is getting them into the showroom,” Caldwell says. “Just getting that traffic will result in an increase of sales for them, especially in the Midwest."

"Which helped us to our strongest May result since May 2004,” he says in a release.

Over in Auburn Hills, Chrysler Group LLC also posted its best May sales volume since 2007, with each division seeing increases, and contributing to a 17% total increase in volume versus last year. The company said Jeep saw a 58% increase, topping the other divisional brands.

Toyota posted a 12.6% improvement versus the month last year, with 243,236 units delivered. Nissan Group in the U.S. posted an 18.8% increase versus last May to hit a record for the month. The Nissan division enjoyed a 17.8% boost in sales. The company said May was the 14th record month over the past 15th months. Altima sales set a May record, with a 12.9% increase.

Honda sales were up about 9%, with big sales gains for Civic and Accord, which has been the best-selling car all year. Accord sales lifted 19.3%; the CR-V compact crossover saw a 19% increase and Civic was up over 19%.

Caldwell says part of it is a change in strategy: for years Honda has been known as having the least incentives in the business. "Now they are loosening the purse strings a bit," she says.

Hyundai Motor America posted its best month not only for May, but for any month in the U.S. market with deliveries up 3.7% versus May last year.

The only major automaker with lower sales for the month was Volkswagen, with 32,136 deliveries last month versus 38,013 units in the month last year. May 2013 sales were already down 1.7% versus the month in 2012.

"Yes, they are the outlier here," says Caldwell. "Everyone is breaking some sort of record, but they are struggling, and part of it is product-related."

She tells Marketing Daily that the issue partly the competition. "Everyone else is so strong in VW's big segments: compacts and mid-size. With Accord, Altima, Fusion and Camry with deals they are giving out, it's just a tough market."