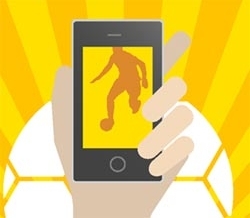 The 2014 FIFA World Cup in Brazil will again be a measure of the world's massive migration to mobile devices.

Since so much of the world relies on their cell phones as the first and only connections to digital content, the volume of user and publisher activity around the event every four years registers just how much global reach mobile platforms have achieved. The 2014 event may represent something of a tipping point and an enormous opportunity for advertisers.

According to a worldwide survey of football fans in 11 markets via multiple international chapters of the Interactive Advertising Bureau, 48% of smartphone-owning fans of the sport will be following the games in some way on their devices. In fact, mobile is second only to TV as the device most cited by fans as their primary point of access to the games.

The extensive survey, “2014 World Cup: A Global Mobile Perspective.” found that the games would not only reach unprecedented numbers of mobile fans, but that the audience on the whole was already receptive to mobile ad offers. More than a third (37%) say they click on mobile ads daily. While enthusiasm for football is highest in Italy and the Latin American host region, the IAB estimates that the potential addressable viewing audience for the World Cup, which runs through much of June and into early July, approaches a billion in China, 194 million in the U.S., 44 million in the UK and 174 million in host country Brazil.

But the IAB research also drills more precisely into how mobile fans expect to use the device for following the games. No surprise, TV and video will be big winners for mobile at the World Cup, but fans will also be using devices in tandem and in parallel with TV and across multiple apps.

Among them, 35% of viewers plan to use their devices throughout TV broadcasts, while 37% expect to refer to devices during half-time. Indeed, a fifth of viewers will be deep multitasking, using TV and another device to watch more than one game in tandem. Only 14% said they would be using a mobile device to watch non-football content.

Most mobile game followers will be using their devices to keep up to date on scores (45%) or monitor the games when away from home (30%). Viewers will be looking for Cup content that is both quick and deep. 58% say they will be accessing basic news and score information, but almost as many (46%) are also coming for richer material like TV streams and video clips. More than a quarter of respondents said they would be using their phones to view live game broadcasts, and 40% of the most devoted fans expect to do so.

But the World Cup also represents a massive opportunity for attaining social reach, since almost a third of all fans (27%) say they are compelled to use their devices to monitor the games because it is the easiest way to share information with friends. Almost all respondents (90%) said they expect to be sharing their World Cup experience in some way via their devices. And more than a third (35%) say they can’t even imagine not using the social channel during the games.

The value of World Cup content to fans is so high that the IAB suggests there are opportunities here for direct monetization of the event. Among respondents, 68% were willing to pay for World Cup video content, with sentiment the strongest in the UK (80%), Mexico (78%) and Colombia (74%).

The IAB argues that the World Cup mobile audience is not only vast, but also increasingly receptive to advertising messages during their pursuit of content. Globally, 37% of smartphone football fans surveyed said they were clicking on mobile ads daily, and the metric rose to 45% among those using smartphones as a primary device. Still, responsiveness to advertising varies greatly by market, with 47% of Mexican and Columbian mobile fans engaging ads daily but only 29% of Japanese users.

The U.S. is still among the least responsive markets to mobile ads (34%).

The one advertising element that appears to transcend all borders is the need for relevance and value. When asked to cite the most important factors that move them to interact with a mobile ad, 31% of fans worldwide cited deals or coupons, but just as many said they were willing to engage ads for products that interested them. The pattern was fairly consistent from country to country. Yet, consumers are also putting a premium on having some fun. Even more than product relevance, or even content related to favorite teams, fans say that most often (23%) they are most likely to pay attention to mobile ads that entertain them.

Commenting on the report, Anna Bager, vice president and general manager, Mobile Marketing Center of Excellence at the IAB, says: “This study highlights that sporting fans around the world are already open to mobile marketing and are keen to leverage their phones as part of their experience of the game. There is no question that this opens the door for brands to reach a valuable audience through mobile just as the entire globe is about to be transfixed by one of the most anticipated sporting events of the year.”

Some of the global brands that have already show commitment to mobile advertising and marketing have already aligned with FIFA as major event sponsors, including Coca-Cola, Adidas, VISA, Budweiser, McDonald's, Johnson & Johnson and Hyundai/Kia.

While the World Cup is a global happening, the media landscape around it becomes very fragmented and complex as the property gets licensed around the world. Separate TV, radio, Internet and mobile rights are negotiated in each of 218 territories. The Web of licenses is so extensive it takes a 37-page document at the FIFA site just to outline them all.

The World Cup runs from June 12 to July 13. The full, detailed IAB report is the result of 5500 surveys across 11 markets. It is available for download at the IAB site.