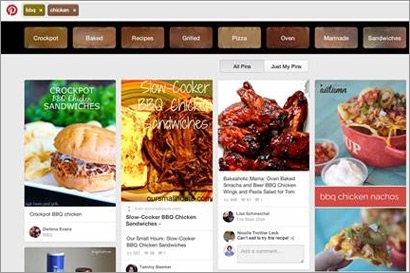 Pinterest has become more like a search engine with Wednesday's launch of Guided Search for desktops, and the company has also hired a couple of former Apple engineers to lead development.

The Guided Search feature initially launched on mobile in April to find pins on its site. Now it has made the feature available for the desktop, adding a few improvements. The feature does not search the Web to determine links back to the boards, but perhaps will in the future or through the company's recently updated analytics platform.

From the first query, the site serves up related terms after entering a keyword to start a search. For example, search on the term BBQ and a row of buttons at the top of the page suggests related or refined terms like BIY or Brick to guide users to other pins uploaded by the community. The site categorizes the images pinned.

The descriptive guides help sift through ideas from other Pinners. The visuals aim to make it easier for users to scroll through the guides and click any that look interesting to steer searches in a different direction.

Along with the visual guides, the search bar on Web has become more visible. Guided Search on the desktop will become available in English during the coming weeks, and soon worldwide, the company said.

Pinterest also has hired former Apple execs to lead the company's Engineering and Design departments. Michael Lopp, a key player on the MAC OS X engineering team, takes the lead for Pinterest's engineering team, drawing upon his experience at Netscape, Symantec and Borland. Lopp will lead the Pinterest technical team with a focus on product development and scale.