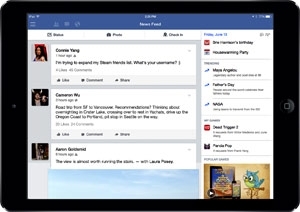 The latest update to Facebook’s iPad app in the U.S. adds a Web-style sidebar and puts the focus squarely on gaming.

The new right-hand panel, similar to that on the Web-based version of Facebook, appears next to the news feed when the iPad is turned to landscape mode. Along with things like birthdays, events and trending topics, it shows trending videos—providing a selection of videos according to a user’s demographic—and areas showing games a user already plays (My Games), as well as suggested titles (Popular Games).

He noted that more than 70% of people who use Facebook for iPad worldwide played a Facebook-connected game in the past 90 days. “So we’re also dedicating a section of the iPad app to games people play, and over time, we will include ads where game developers can engage players,” stated Medeiros.

The move also underscores how important app install ads have become for Facebook, which is believed to generate the bulk of its mobile ad revenue from the format that drives installs from the App Store and Google Play.

Last week, Facebook said it was aligning its mobile app ads to other formats by having them be connected to a Facebook page, adding social context (such as showing when a friend likes a Page) and adding like, comment and share buttons.

On Monday, Facebook noted that game developers that want to be featured in the updated iPad app should register their iPad apps with Facebook in the App Dashboard, integrate the Facebook Login (if they don’t have a desktop app), and upload a video to the App details page in the social network’s App Center.