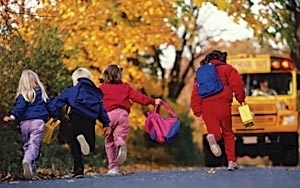 The National Retail Federation predicts that the average family will spend $669.28 this year, outfitting young students with clothes, shoes, school supplies and essential electronics, an increase of about 5% from last year. And the Washington D.C.-based trade group forecasts total spending of $26.5 billion, a slight decrease due to fewer students per household. Combined spending for back to school and college is expected to reach $74.9 billion.

By grade, spending will be heaviest among families with high school students, at about $683, declining to $683.13 for middle-schoolers. Those with kids in grade school are likely to spend an average of $580.94.

The survey detected plenty of channel-changing among parents, with the highest number in the survey’s history saying they intend to shop at clothing stores (53.8% of all shoppers) and electronic stores (27.5%.)

And it also finds consumers are getting cagier about promotions, with 25.4% saying they will wait until the last two weeks before school starts, in order to sweat out sale prices. Last year, just 21.8% planned to do so.

“Slow improvements in the economy may have contributed to the growth in confidence among back-to-school shoppers, and while we are encouraged by the overall tone of the results and expect to see continued improvement in consumer spending through the year, we know Americans are still grappling with their purchase decisions every day,” says Matthew Shay, president and CEO, in its release. “Throughout the history of this survey, spending has fluctuated based on family needs each year, and this summer, we expect parents to continue to use caution, but also make smart decisions for their family budget that is a good balance between what their children ‘want’ and what they actually need.”