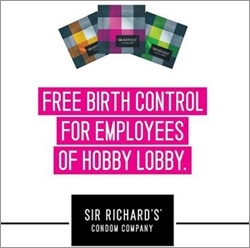 Now that the Supreme Court has ruled that retailer Hobby Lobby does not need to cover their employee's contraceptives under the Affordable Care Act, Sir Richards Condoms and ad agency TDA_Boulder are launching a social media campaign to provide free condoms to any Hobby Lobby employee who requests them.

Under the effort, Sir Richard’s Facebook page features the message: “We believe everyone has the right to enjoy mind-blowing, safe sex. So... we are offering a free box of condoms to any Hobby Lobby employees who want them. Just message us on Facebook with your name and address and we'll send you a free box of Sir Richard’s.” Free boxes are also available by posting a message via its LinkedIn account.

The offer is supported by paid posts on Facebook and LinkedIn.

Of course, executives don’t know how many requests will really come from Hobby Lobby staffers, as, according to Sir Richard's CEO Tracey Forster, “unless the numbers were astronomical, we aren't checking to make sure they are HL employees. Just trusting them.” Still, the campaign's first day, July 11, garnered 14 box requests.

TDA has vested interest in the project--it is a founding investor in Sir Richard’s, a for-profit business with philanthropic goals that includes donating condoms to developing countries for each condom it sells. The agency and the condom company developed the campaign given their belief that employees’ birth control choices are not their employers’ business.

This is not the first time that the condom maker and the agency have garnered hot headlines. A couple years ago, for example, in response to the Rush Limbaugh/Sandra Fluke controversy, they ran a pro-”slut” campaign.

“We're always on the lookout for Sir Richard's ideas," says Dan Colburn, copywriter, TDA_Boulder. "The beauty of working on a condom account is the freedom we have to offer an opinion on issues that most brands can't touch. Art director Austin O'Connor and I were chatting about how frustrating it must be right now to be employed by Hobby Lobby, and from there we just connected the dots.”