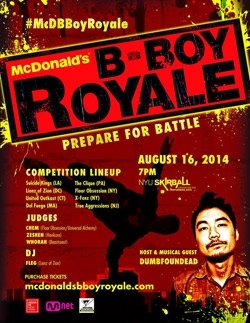 The event, McDonald's B-Boy Royale, is a competition among eight U.S. breaking crews that feature Asian-American breaker boys, or "b-boys."

First- and second-place prizes are $3,000 and $1,000, respectively. The competition will be judged by three b-boys who have won major break dance competitions around the world.

The competition will be hosted by Korean American rapper and YouTube star Dumbfoundead, who will also perform tracks from his latest album. All proceeds for the event will benefit Ronald McDonald House Charities. Tickets are being sold for $20 and $15.

The event is being promoted as the "first annual" McDonald's B-Boy Royale, and as "New York City's largest breakdancing competition."

“With the help of the b-boy community, we’re hoping to create the premier breakdance competition in New York,” said Josh Kaufman, a McDonald's New York Tri-State area owner/operator who helped develop the event, to be held on Aug. 16 at the NYU Skirball Center for the Performing Arts.

Mnet and Coca-Cola are among the other sponsors. The Asian-American population, estimated at about 18.2 million as of 2012, has increased by more than 50% since 2000 -- the fastest growth rate of any multicultural segment in the U.S., according to Nielsen’s “State of the Asian American Consumer." Asian-American buying power, currently at $718 billion, is projected to reach $1 trillion by 2017