Lexus Back With Weinstein Project 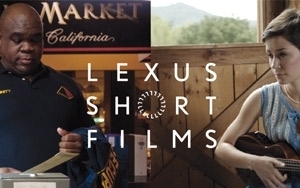 In February last year Lexus launched a global partnership with Weinstein Company to produce a series of short films under a “Life is Amazing” campaign banner. The videos were vetted by Weinstein, and a pair of the shorts (so to speak) were screened at a pre-Oscars party.

The automaker also launched a hub for the project. The filmmakers from various countries were exempted from putting Lexus vehicles in their films as long as they adhered to the "Life is Amazing" theme.

The project is back for the second year, but with a focus on two of the filmmakers who are getting the intensive mentoring treatment by directors and actress Katie Holmes. The directors helping out are Justin Chadwick, who directed "Mandela"; Simon Curtis, who directed "My Week With Marilyn"; Antoine Fuqua, who directed "Training Day"; and Phillip Noyce, who directed the upcoming Weinstein feature "The Giver."

Lexus says the shorts, “Market Hours” by Stanford grad Jon Goldman, and “Operation Barn Owl” by Japanese auteur Satsuki Okawa with script by writer Ken Ochiai, were first screened at the Short Shorts Film Festival in Tokyo in May (Okawa’s film "Koyuki's Wandering Football" was commissioned for the Japanese Professional Football League for its 20th anniversary project.) In the U.S. the films will run at the Los Angeles Shorts Festival, The Rhode Island Film Festival, and The Portland Film Festival over the coming weeks, with the schedule posted at the Web site.

The deal also gets Lexus in the spotlight, as the films' premieres will this month in Los Angeles and New York include footage from Weinstein-produced "The Giver," which stars Jeff Bridges, Meryl Streep, Alexander Skarsgard, Katie Holmes, and Taylor Swift. Weinstein says the short films will also screen in tandem with "The Giver." The shorts get worldwide release and housed online at the project Web site, which also hosts the rising filmmakers’ short features about the process of being mentored