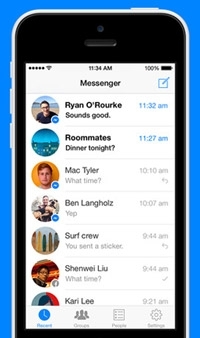 Moving ahead with its siloed app strategy, Facebook is reminding users that they will soon need a separate app to message friends from their mobile devices.

The social giant first announced plans to split its flagship app from Facebook Messenger in April. Facebook is now notifying users around the world of the imminent switch.

“In the next few days, we're continuing to notify more people that if they want to send and receive Facebook messages, they'll need to download the Messenger app,” Facebook said in a statement.

The move is part of Facebook’s broader strategy to offer additional apps, rather than squeeze its full suite of services into a single mobile offering.

Presently, Facebook counts about 200 million monthly Messenger users. By making the Facebook app and Messenger app two separate apps, Facebook executives believe that can better improve the performance of both apps over time.

According to a company spokesperson, Facebook users will still be able to see message notifications in their core Facebook app and easily switch between Facebook and Messenger.

Once a point of weakness for Facebook, mobile continues to take the company’s fortunes to new heights. Thanks to its mobile ad business, Facebook just reported earnings of $0.42 per share, excluding one-time items, on revenue of $2.91 billion -- up 61% year-over-year.

The number of daily active mobile users grew by nearly 40%, year-over-year, and was up by more than 650 million on average in June.

Second only to Google and its 50% mobile market share, Facebook now boasts 22% of the mobile advertising market, according to eMarketer.