Belk Goes Back To School With HelloWorld 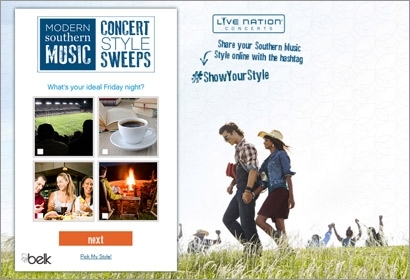 For the first time, Belk is looking to target their tween and teen age demographic, viewing this group as the future of their customer base. And the retailer is using One Direction concert tickets as bait.

Belk is teaming with digital agency HelloWorld to launch the “Modern Southern Music Concert Style Sweeps” back-to-school promotion. People enter via Belk's Facebook page or the ConcertStyleSweeps.com website through September 15 to win prizes that include a trip for four to any U.S. Live Nation concert, a $1,000 Belk gift card, and $500 spending money. The campaign is being promoted via Belk's social channels - Facebook, Twitter, and Pinterest.

The sweepstakes connects to back-to-school shopping. To that end, a “Personality Quiz” inquires about entrants’ favorite concert type and reveals details about their back-to-school style.

A key aspect of the campaign was to design it in a way that helps Belk better understand its customer demographics. Hence, data will track what ages are most engaged by the campaign and who clicked through from the quiz results and started shopping on Belk.com. Plus, this campaign requires entrant's mobile number at signup - thus helping Belk to build out their SMS database.

"We're always looking for ways to engage new audiences to Belk," says Matt Wise, CEO, HelloWorld. "We started last year [2013] with our wedding campaign to attract brides, and with this new campaign, we're hoping to create lifelong fans among the 13 and up age group. These campaigns are designed to drive engagement and trial (in-store visits) and ultimately build long-term loyalty."

HelloWorld has been a Belk agency since 2008, developing campaigns that have ranged from providing legal and prize fulfillment expertise to full-scale, multi-channel programs.