Advertisers on Twitter can now create campaigns focused on specific marketing goals, and pay only when people take desired actions as a result.

With the rollout of objective-based campaigns, announced Thursday, marketers can choose from a range of key goals including driving Tweet engagements, Web site clicks or conversions, app installs or engagements, followers, or leads. For each objective, Twitter’s self-serve ads tool will suggest the appropriate ad format.

“Let’s say you’re a camera retailer, and you want to drive more visitors to the summer promotion on your Web site,” stated a Twitter blog post. “You can create a Web site clicks or conversions campaign, and then promote a Tweet with a Web site link or Website Card, our recommended ad format that is specifically designed to drive website traffic.”

The company said it has also added tools to make it simpler to create an ad, including an image cropper with drag-and-drop capability to more easily customize photos.

In terms of paying for performance, Twitter also gave examples of specific actions that would represent conversions. For a “Leads On Twitter” campaign, the creative setup includes a Lead Generation Card — a tool to help advertisers connect off-Twitter with users interested in their message. A marketer would only pay when someone submitted their information on one of these cards.

Similarly, app install and app engagement campaigns are only charged on a cost-per-app-click basis. Campaigns can also be optimized based on metrics tied to particular goals. “For instance, reports for your Web site clicks or conversions campaign will show total link clicks and cost-per-link-click. If you have a tracking pixel set up, the reports will also show total conversions and cost per conversion. All campaign data can be easily downloaded into a CSV file,” Twitter stated.

The company said it has seen positive results with clients testing objective-based campaigns over the last few months, but didn’t provide details. The new offering is available in beta now to small and medium-sized business and API partners globally, and will be rolled out to managed clients by invitation in a few months.

During Twitter’s latest earnings call, CEO Dick Costolo indicated the majority of self-service buying comes from small businesses rather than from larger advertisers.  “We are encouraged by the impact that self-serve has on the SMB advertiser base and I think it’s a big opportunity for us,” he said. 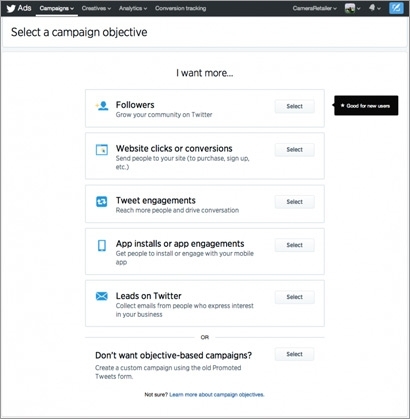