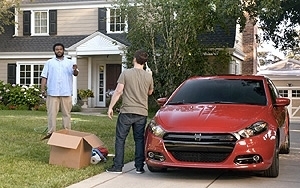 Q: Why did you go with Robinson and Johnson for this campaign, and was it a tough get?

Ortiz: Craig Robinson and Jake Johnson had the exact chemistry we were looking for. Dodge has always been able to have more fun with its advertising than most other car brands because it has more attitude. Craig and Jake embodied those attributes perfectly, and they were able to take the material to a level that exceeded our expectations. We were fortunate that they were both available given their schedules.

Q: In addition to YouTube experience and CollegeHumor.com, what does the digital landscape for this campaign look like?

Peet: We have partnered with a video vendor (true[X])  that allows us to create experiences that incorporate several of the spots, full-screen viewing, social shares and a closer look at the Dart without leaving the environment in which the ad was served. We also have extensions with Fantasy football partners like CBS & NFL, RedBull + ESPN/Fox Broadcast extensions online.

Q: Is Dodge going to support the campaign online with a broad digital ad buy funneling traffic to the YouTube site? Will the videos live on other sites with a propensity to attract large numbers of younger viewers.

Peet: We have a robust ecosystem where we are hosting videos on YouTube, College Humor and our own Web site, plus our social platforms will be pushing as well. The media partners we picked absolutely target a younger, social, thrillseeker audience. This includes scaling to mobile -- since this partner allows us to play the videos within a banner unit, we will be sending them to Dodge.com to view more on the Dart. All College Humor banner units will be driving to our custom hub, and of course the buys within YouTube will send them to the Jake & Craig experience.

Q: There are a lot of different video lengths here. I'm wondering where a 5-second cut would run. That's pretty short. Is it for mobile?

Ortiz: We have developed almost two dozen spots plus a song performed by Craig himself (it will launch very soon). The :05 pieces will be used for animated billboards on broadcast, and the :15 and :30 spots will run both on broadcast and digitally.

Q: What are other mobile-media components?

Peet: The video networks we work with all have mobile components and experiences for us to target this younger, tech-savvy consumer. This allows us to serve ads across multiple platforms that represent music, social gaming, free WiFi and Video/Content sites. The publishers can range from Grooveshark, Vice, iHeart Radio, Maker, Fox Sports, AT&T, Zynga and even airport wifi hotspots.

Q: Who has been buying Dart? Are they, in fact, the Gen Y buyers the campaign is aiming to attract? I think Millennials are now second to Boomers in car purchases?

Ortiz: We discovered that people who own Darts are quite proud of their cars, and this type of prideful ownership is something you don't normally see in the compact car category, especially among younger owners. So it was interesting that the Dart actually had younger drivers feeling proud of their cars again.