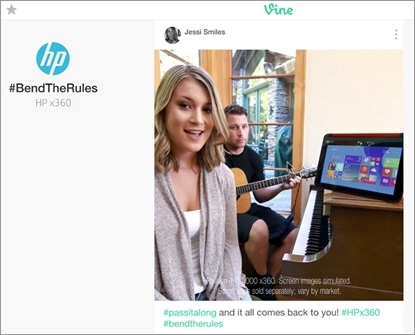 Advertising isn’t one medium or another anymore -- and a new campaign from Hewlett-Packard and ad agency 180 LA blends emerging media with traditional to create an entirely new hybrid.

"The agency had to push ourselves to innovate and think about how we best showcase a new medium within an established one," says William Gelner, chief creative officer of 180LA.

The "Bend The Rules" campaign was initially designed to live through social media. 180LA worked with the management company Niche that represents popular “videographers” to select and book five influential personalities who post on the Vine platform.

Each Viner then created a six-second clip to highlight Hewlett-Packard's convertible PC, the x360 Pavilion, a tablet computer that can bend and fold upon itself. The premise was to showcase the flexibility of the computer and its applications with fellow “rule benders.”

The campaign was tagged with #BendTheRules and ran across social media channels.

However, one Vine video from Robby Ayala became a viral hit, with more than 10 million views. This video shows him watching a girl use her HP tablet and then allowing him to think his regular computer can fold as well. He ends up breaking it.

Then, 180LA quickly pivoted to capitalize on this viral success by developing a traditional TV spot. There was no original intention to make a TV ad out of Vines, but seeing the success of the online campaign sparked the idea of expanding the campaign’s reach through TV, say 180LA executives.

Transforming the videos to a traditional TV spot was conducted in a compressed time frame. After the video was originally posted July 16, 180LA developed a concept, produced a 30-second spot, and posted online August 8th that began airing August 11th.

The Connected ad is the first TV ad made entirely in the setting of Vine. The ad links each Vine personality as the x360 tablet computer bends and travels through each individual's video in a choreographed continuum, all set within the Vine user experience. "For a campaign called ‘Bend The Rules’ we thought ‘let’s really do it,’” says Gelner. “We took a digital execution and brought it to TV. You usually see it the other way around."

180LA has worked with HP since 2013. The commercial can be viewed here. More of the #BendTheRules greater campaign is available here.