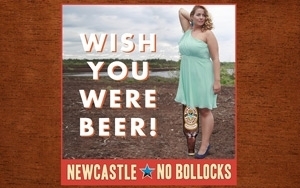 Newcastle Brown Ale is soliciting photos from its fans that the beer brand can digitally manipulate and turn into ads.

While the brand is not the first to crowdsource its advertising content, “Newcastle definitely is the best at turning those photos into obvious, exaggerated, poorly executed ads,” the company says, tongue in cheek.

The effort, called #NewcastleAdAid, was introduced earlier this week in a 90-second video on Newcastle’s Facebook page and on Twitter.

“This lazy, branded content isn't gonna make itself,” according to the video’s caption. “We need your help. Submit any photo with #NewcastleAdAid and if you’re lucky, we’ll turn it into a Newcastle beer ad. Rules in video apply.”

“Newcastle spent a significant portion of its marketing budget on celebrity talent we used to get more people to watch our ads earlier this year,” Kilbury tells Marketing Daily. “Those ads won a lot of awards, but now we kind of have to go on the cheap. Everyone knows user-generated content is just a ploy to get fans to do our work for us, and we're just calling it like it is. So thanks in advance to all of our fans who’ll send their mediocre photos to us!”

The celebrity ads -- featuring Elizabeth Hurley, Stephen Merchant and Zachary Quinto -- satirically imagine how great America could have been if England had won the Revolutionary War. The effort, called "If We Won," was the follow-up to the beer maker’s "If We Made It" Super Bowl program, which also starred celebrities, Anna Kendrick and Keyshawn Johnson.