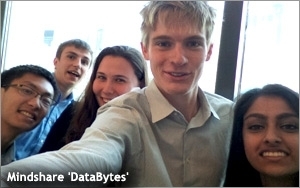 WPP’s Mindshare has revamped its internship program to focus more on where it believes the industry is headed rather than where it’s been.

The shop has restructured its program, now called Data Bytes that focuses on data, insights and real-time marketing. It’s a complete departure from past practice where interns were hired for various departments throughout the agency. Now, all of the interns hired at the agency are placed in the agency’s Marketing Sciences discipline. As part of the 8-week curriculum, the interns hold weekly sessions with staff from The Loop, the agency’s real-time marketing offering that was introduced earlier this year.

Throughout the program the interns work with their respective mentors to create and develop individual projects, with their experience culminating in a presentation to the office leadership team. The projects covered topics like evaluating the role of viewability in digital measurement, finding new ways to communicate insights, and examining store sales data to better understand the effects of weather targeted digital campaigns.

The program focuses on what a rep said was “grooming the next generation of ‘Math Men,” with most of the interns coming from backgrounds in computer science, economics, industrial engineering and mathematics.

The revamped effort comes amid a heightened sense of urgency and debate over how Adland can better recruit the best and brightest to become its next generation of leaders. The debate intensified last week when the heads of the 4A’s (Nancy Hill) and Association of National Advertisers (Bob Liodice) traded shots in the Wall Street Journal about why the industry isn’t drawing enough top university graduates to its ranks.

Other agencies are also taking steps to better equip young talent for careers in the industry. Earlier this month University of Akron’s Taylor Institute of Direct Marketing partnered with the V12 Group in a program that enables students to execute marketing campaigns for local clients via the agency’s direct interactive marketing platform “Launchpad.”

Also this month, Horizon Media and MyersBizNet kicked off the industry’s most extensive networking program for more than 300 New York City-based interns who had the chance to mingle with leaders across an array of advertising, media and marketing firms.

Last month, DigitasLBi Boston conducted an “Eternship” program -- a marketing “boot camp” where 25 local high school students were immersed at the agency to learn about various capabilities, and create their own ad campaigns for a sample client challenge. In turn, the agency said it gained insight and inspiration from youth culture.

When he assumed the chairmanship of the 4As back in May, Horizon Founder and CEO Bill Koenigsberg said development of young talent must be a top priority.

“With so much change, the opportunity for the 4As and my fellow board members to help shape the future of marketing has never been bigger,” Koenigsberg said. “It’s also time to empower our industry’s young talent with a platform to facilitate change not only within our industry but for the greater good.”