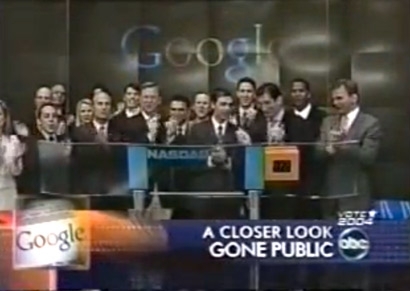 Is there a correlation between Google's use of the Dutch auction stock bidding process when taking the company through an initial public offering (IPO) and the AdWords auction model? Google originally launched AdWords with a CPM model and later transitioned it to cost per click (CPC), from seller to buyer-driven. Rather than sellers telling buyers what to view, Google let consumers ask by raising their hand through searches. Transparency and eliminating the fat are two parallels between the Dutch auction and AdWords model -- but the industry has seen similar themes overall throughout Wall Street, said David Hirsch, managing partner of Metamorphic Ventures, a New York City-based venture capital firm that invests in start-up and early-stage technology businesses such as Google-owned Songza, Yahoo-owned Stamped, IndieGoGo, and many others.

There's no shortage of tales to tell on how Google's cofounders took the company through an IPO 10 years ago. Quartz details U.S. and international tax rates, Business Insider lists the six weirdest things like Google's head of engineering telling all employees he would take a baseball bat and smash the windshields of any new BMWs or Porsches in the parking lot he saw within the few days following the IPO, and ABC News tells us that Page and Brin set up a bidding process known as a Dutch auction to give a larger pool of investors an opportunity to determine the IPO price and buy the stock before it began trading on Nasdaq.

Perhaps the idea behind the stock bidding process somehow, in the cofounder's minds, had an influence on Google's AdWords paid search engine marketing model. It's a model near and dear to the hearts of Page and Brin.

There were no shortages of bids last year. Data from AdGooroo, a Kantar Media company, suggests that retailers spent more than $2.8 billion on paid search desktop ads on Google AdWords and Yahoo-Bing Network in 2013, not including mobile search advertising or Product Listing Ads.

AdGooroo's report provides rankings on desktops by impression share of the top 50 advertisers in 15 retail categories like Apparel & fashion or home improvements on U.S. Google AdWords for calendar year 2013, along with 2012 rank and year-over-year change in rank for each advertiser.

6pm.com remains one example of a company in the category of Apparel & Fashion keeping its lead in 2013, compared with the prior year. Zappo's site ranks No. 1 in U.S. AdWords impressions ranking last year and in the prior year. Bloomingdales.com rose to No. 2 from No. 5, respectively. The biggest leap was dressfirst.com -- landing at 47, up from 1458. (Yes, that's accurate. I double-checked.)

BestBuy.com held steady at No. 1, followed by Apple.com at No. 2 in U.S. AdWords impression ranking. Microsoftstore.com moved up to No. 3 in 2013 from No. 4 in 2012, but the biggest mover in the consumer electronics categorywas besatsbydre.com, with a 93-position jump to 22 from 115, respectively. There were other big movers too: Partstore.com moved to 23 from 58, gopro.com jumped to position No. 34 from No.128, and clicknshop.com leaped to No. 48 from No. 537.