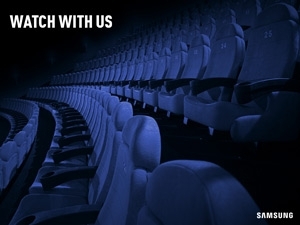 The Emmys are television’s biggest night, and Samsung’s television division is looking to attract a little of its own attention on some decidedly smaller screen.

The brand is using Monday night’s event to relaunch its SamsungTV Vine channel with Emmy-themed six-second videos highlighting the top nominated shows. (An image of a light bulb turning on, then growing piles of money, a competing second light bulb turning on, money disappearing, the first bulb growing brighter, and the money reappearing represents HBO’s “Silicon Valley,” for instance.)

“We’re the number one television brand, and this is a chance to follow through on our promise to deliver an immersive TV experience,” Peggy Ang, vice president of marketing communications for Samsung Electronics America, tells Marketing Daily. “We’re just going to have fun, and we’re going to connect [with fans] not just with words, but with pictures and video.”

The company has used its SamsungTV Vine account only sporadically, Ang says. Using the Emmys as a chance to relaunch the channel gives Samsung a chance to make a concerted effort to develop content that works with its brief, snackable nature.

“Vine [has] an ability to show videos that are meant to be more of a fun nature — entertainment, as opposed to documentary-style,” Ang says.

The company is looking to turn the Emmys into a “360 experience” by rewarding fans rooting for shows via social media with special prizes. While some of the rewards will be digital, in New York and Los Angeles street teams will be paying surprise visits on fans with prizes related to the shows they’re rooting for (such as a shield or sword for "Game of Thrones" fans).

Determining the winners (two of whom will win a curved ultra-high-definition televisions) will be based on fan enthusiasm during the broadcast, Ang says. “We’ll be responding to them as they respond to us, and we’re going to engage with them,” she says.

Though the Emmys are a one-night-only, annual event, the company is hoping to turn the short entertainment videos and connection with active social media fans into an ongoing program.

“What we’d like to see is to make this a day-in, day-out experience for us,” Ang says. “This is not a one-time, one-night event, but rather something throughout the year to surprise our fans.”