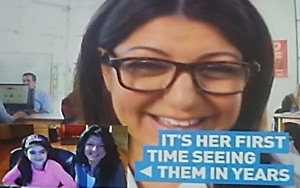 I have seen the ad so many times that I sort of feel like part of their family, but four times back-to-back is a bit much. Don't you think?

The PSA was developed pro bono by the advertising agency Y&R and runs in times and spaces donated by the TV broadcast media. An Ad Council spokesperson said the organization cannot control or predict where the ad airs and runs. The group made several, but one in particular plays continually, repeatedly like an old friend who wore out their welcome after living in your spare room for a year.

The campaign -- which is very informative and well done -- aims to bridge the digital divide by providing information about high-speed, low-cost Internet access, computers, and free digital literacy classes to Americans. Those who are interested can find out more information about these services through the Ad Council's Web site, but nowhere in the television message does it mention the benefits. The ad basically shows a woman using live chat for the first time to talk with relatives she had not seen in a long time.

The campaign was created to help the 62 million people in the United States -- one in five -- who consider themselves non-users of the Internet. Digital literacy skills help people search for jobs, connect with relatives, access money savings, and, per the Ad Council spokesperson, improve lives.

At the end of the PSA a small inscription at the bottom of the ad directs audiences to EveryoneOn.org, where site visitors can use a ZIP code locator tool to find free digital literacy training classes and links to online training resources. Information, available in English and Spanish, comes from a nationwide partner network. The campaign offers access to digital literacy programs in more than 21,000 libraries and training centers.

If a search or digital marketer buying online display media ran an ad similar to this four times in a row, what do you think critics and consumers would think, do, and say? Frankly, I now turn down the volume.

I asked the Ad Council to provide metrics on the amount of people who might have seen the ad vs. visits to the Web site on either desktop or mobile. I'll let you know when I know.