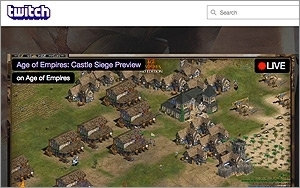 Amazon continues to become an increasingly powerful marketplace as it builds out an advertising platform and home for original content through Twitch -- but it's the possibilities for online video advertising market that stir one Wall Street analyst.

Twitch's average user engagement of 106 minutes of content watched per-user per-day in 2013, and audience segment, made up mostly of users between the ages 18 and 49, will complement any advertising initiatives pursued by Amazon, Baird Equity Research Analyst Colin Sebastian wrote in a research note. "Twitch offers Amazon a rich-media alternative to Google's YouTube, and also a leg into the online video advertising market," Sebastian explains.

Amazon won the bid to acquire the gaming platform from Google after antitrust concerns derailed the deal, according to reports.

Analysts believe it's all about the original content. RBC Capital Markets Analyst Mark Mahaney and Associate Brian Peak give in a research note published Tuesday several examples of material advertising revenue generation from user-generated content, pointing to Facebook, Twitter, and YouTube as examples. They estimate Amazon holds $8 billion in cash against $3 billion in debt.

"The lack of any financial disclosures is a bit galling," but overall it's a relatively small deal for a $155 billion market cap, per the report.

As for the ad network, David Rodnitzky, 3Q Digital founder and CEO, believes the variety of data will move the company forward. While advertisers could use historic purchase behavior on Amazon to better target their display and content ads across the Web, there are two reasons why an Amazon ad network ultimately won't serious compete with Google.

Amazon tends to keep the good ad inventory, and only allows marketers to see what they cannot better monetize themselves directly, Rodnitzky said. The company likely would take the same approach when it comes to an external network, bidding against advertisers and reserving the best inventory for themselves.

Facebook poses a greater threat to Google compared to Amazon. The social network has much more consumer data than Amazon and remains in a better position to provide advertisers with even great targeting opportunities, as well as revenue for publishers. Facebook has mounds of data on site behavior and from third-parties that use Facebook Connect for registration, Rodnitzky said. "Combine this with the fact that Facebook is not a competitor to its ad clients, and I think Facebook poses a far more realistic threat to Google's AdSense network than anything Amazon might concoct," he said.