Google Demonstrates Project Wing For Drone-Based Delivery, But Where Does It Fit In The Coffer? 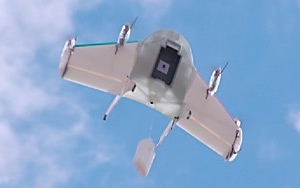 Drone use is highly controversial in the United States, but that hasn't stopped Google from experimenting with an unmanned delivery service through its Project X division. A prototype dubbed Project Wing with a 5-foot-wide single wingspan carried candy bars, dog treats, cattle vaccines, water and radios to farmers in Queensland, Australia -- about 30 test flights in all.

Tests conducted in mid-August show an unmanned drone hovering above the ground as it lowers packages. The Atlanticdetails how at the end of the tether, electronics detects the package has hit the ground, detaches from the delivery, and gets pulled back up into the body of the drone. A video on YouTube shows how it works.

While drones are a far cry from search engine marketing, display advertising, and programmatic technology, perfecting the ability to deliver packages via an unmanned aircraft will help Google better understand the nuances in building a variety of hardware. Earlier this year, Google began acquiring satellite companies. It purchased Titan Aerospace, a maker of drones that Facebook also was reportedly interested in buying. Google also got help from an expert in robotics.

Nick Roy, a Massachusetts Institute of Technology roboticist, took a two-year sabbatical from MIT to lead Project Wing. His mission was to determine whether the idea of drone delivery made sense or was just a pipe dream, and whether Google should pursue the creation of a real, reliable service.

It's all about changing the world -- something Google co-founders Larry Page and Sergey Brin know well. Although Roy says yes, they have yet to build a reliable system. The "yes" does give Google the fodder to grow the program and push to create a service that will deliver things people want quickly.

The details in The Atlantic describe Google X's "The Hatchery," how the project originated, who worked on it, and what the drone might look like in the future. Google has not settled on this design for all its future program development, but it has formed the platform for much of their testing," writes The Atlantic's Alexis Madrigal.

"While the hardware is a significant part of the problem, they seem largely agnostic about which flying machine might ultimately serve their needs best," Madrigal writes, explaining how the real challenges on the project will come in the design of the rest of the system like the delivery mechanism.