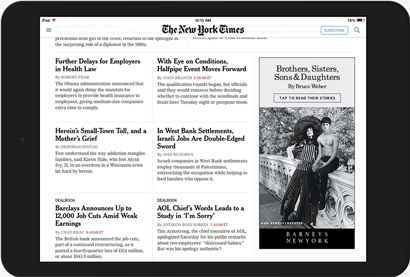 Device and environment continue to be key drivers of performance in mobile advertising, according to the latest survey of ad results from major ad server Medialets. In a detailed look at over 300 billion data points from campaigns run on its serving platform in the first half of this year, the company finds that even with the crude metrics of click-throughs, the average tablet ad CTR of .59% is 44% higher than handset rates of .41%. And the CTR on apps of .56% is double that of ads served onto the mobile Web. Still, handsets accounted for 88.3% of Medialets ads in the first hald. While apps comprised 58.2%.

While the mix of segments is dependent on Medialets’ own customer base, 37.9% of impressions served in !H 2014 were for retailers, followed by 19.9% for tech and telecom, 14.7% for business and finance and 14.4% for CPGs. But when it comes to pricing, the travel and entertainment segment -- responsible for only 8.4% of impressions -- was far and away the most attractive to consumers, with .8% CTRs, compared to most other categories that averaged between .48% and .54% CTRs. Some of this discrepancy no doubt has to do with more direct calls to action in the category -- ads driving people more explicitly to attractive content and offers.

When it comes to formats' effectiveness, rich media that is highly visible without fully dominating a page appears to be especially effective. On handsets, the medium rectangle (300x250) and on tablets the half-page unit were the top performers for engagement. On phones, the expandable banner has now become standard for rich media, as Medialets served three times more of this format than a stock rich banner. The typical expand duration for an expandable banner is a full 16 seconds, which is quite remarkable. Interestingly, however, the format enjoys a 1.14% expansion rate on handsets compared to a much lower .4% rate on tablets. I have to wonder how much this has to do with the relative scale of a tablet banner vs. a mobile banner, and whether the banner format is just that much more invisible on tablets. I must say that the most common glitch I see in tablet banners is poor scaling, where the banner itself retains its handset dimensions and looks more like a shirt tag on the screen than an ad.

One of the reasons for the high duration time in expandable banners is that the majority of rich media ads  (56%) served by Medialets in 1H contained video, and only about a quarter included product specs. And yet Medialets also found that rich media video viewing for the first three-quarters of a clip (from 91.8% completing the first quarter to 80.4% finishing the third quarter) was high, but fell off radically to 33.9% completing the last quarter. Obviously, you need to ensure that a video story is mostly told up front.

Ad networks were supplying nearly the majority (48.3%) of inventory served in 1H by Medialets, with 29.3% direct from publishers, 18% via DSPs and only 4.4% from exchanges. Not surprisingly, it is in those last two categories where we see the greatest growth -- with exchanges up 500% between Q1 and Q2, and DSPs up 455.6%. But in terms of performance as measured by CTR, networked ads (.6%) and publisher ads (.47%) far outperformed DSPs (.3%) and exchanges (.11%). And these metrics continue to support the narrative that more automation invites more fraud, with invalid traffic from DSPs more than double the rate from publishers and networks. Still, Medialets reports a relatively tame level of only .45% non-human activity detected even from DSPs.