Where Your Money Goes In The Programmatic 'Stack' 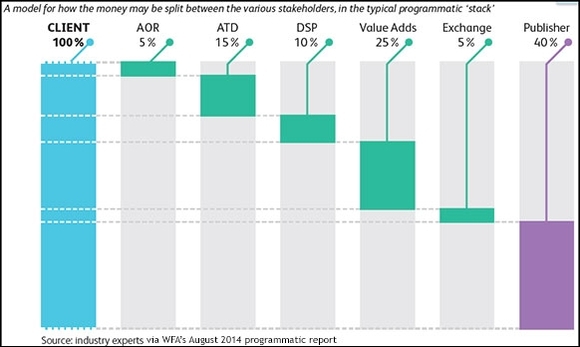 In addition to this week releasing guidance helping brands navigate the programmatic waters, the World Federation of Advertisers (WFA) also asked "industry experts" to spell out where their money goes as it weaves it’s way through the programmatic “stack.”

Note: these figures are rounded and rough averages of the “typical” programmatic buy. Programatic campaigns can differ, obviously, but this gives us a good look at how the money is realistically divvied up -- something marketers might not actually know.

Mark Butterfield, head of global media at Boehringer Ingelheim, commented in the study: “We have little or no clear understanding of what percentage (of digital spend) is being delivered to the media owner and what is being taken in fees from either the agency or middle men. There needs to be clarity in the value chain otherwise clients will continue to question the validity of the digital buy.” Butterfield is a member of the WFA programmatic task force, which includes executives from other big brands such as Coca-Cola, Johnson & Johnson and MasterCard.

The demand-side platform (DSP) takes about a 10% cut, and the ad exchange itself takes about 5%. If the ad buyer goes with “add ons” -- such as targeting, reporting, verification, etc. -- that takes up another 25%, leaving just 40% for the publisher.

“While in an agency trading desk model, typically still more than half of the advertiser spend goes to middle man fees,” writes the WFA in its report, adding that “an opportunity exists for better control over who this money is invested.”

It seems that blind trust has been rampant with programmatic, and now advertisers are now attempting to rein it in to get a clearer picture of what’s happening with their money. It’s not just about how much money the “middle men” are taking either -- yesterday’s RTBlog overviewed the problem with viewability, which is that over 50% of advertiser’s digital ads are still not viewable, and that's with paltry standards.

“While complete transparency may be a utopia, no fundamental mechanical barriers exist between the advertiser and a level of transparency far superior to what is currently available,” the WFA report says.

ad technology, digital, media buying, programmatic, viewability
1 comment about "Where Your Money Goes In The Programmatic 'Stack'".
Check to receive email when comments are posted.
Next story loading