Programmatic Video Private Exchange Use In U.S. Surges Another 140%

The amount of pre-roll video inventory available for programmatic buying increased 14% from Q1 to Q2 2014, and much of that growth was driven by high-end publishers getting on board with programmatic selling.

Per TubeMogul’s report, the amount of inventory available for real-time bidding (RTB) from “Tier” 1 publishers and comScore Top 100 sites increased by 48% and 65%, respectively. That’s down from the respective growth figures of 110% and 78%  posted in between Q4 2013 and Q1 2014 -- but it still represents a clear upward trend.

Another area of exceptional growth is mobile video. TubeMogul says the amount of mobile video available for programmatic buying in the U.S. has increased by over 1,000% in the past nine months, attributing the growth to “the addition of several major exchanges.” 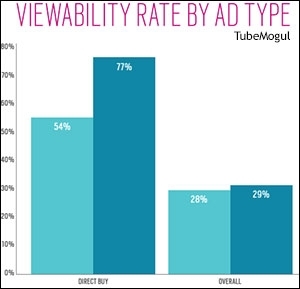 A TubeMogul representative acknowledged that the addition of mobile inventory sources skews the numbers, and that “while [TubeMogul] did enjoy some growth, it’s not 100% representative,” adding that it should “stabilize next quarter.”

While viewability rates for inventory purchased direct from publishers increased 39% (up to 77%) quarter-over-quarter, TubeMogul notes that the overall viewability rates were nearly identical to Q1 2014 -- checking in at an abysmal 30%, just 1% better than the previous quarter.

The lack of overall improvement on the viewability front was highlighted in a report form video ad management firm Vindico earlier this week. How the Media Rating Council (MRC) now-implemented standard of “50% of the video ad being in-view for at least two seconds” changes the pictures remains to be seen.

The cost to buy pre-roll video inventory increased 13% quarter-over-quarter, with all types of inventory -- from “premium” to “remnant” -- becoming at least 10% more expensive in Q2.