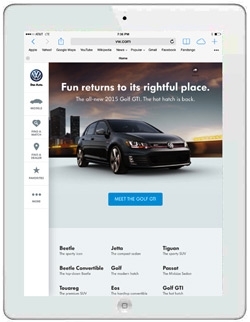 Auto marketers were among the first to embrace content and advertising on smartphone screens, and the auto remains one of the top-spending mobile ad categories. But that hardly means auto brands have mastered the medium that plays a growing role in the car-shopping process.

A new study from digital think tank L2 highlights the industry's efforts to adapt to the shifting mobile landscape and car shoppers' mobile habits. For instance, nearly one in 10 auto shoppers are already at a dealership when they access information from a mobile device, according to a June study from xAd, Telematics and Nielsen.

While almost all (90%) auto sites are mobile-optimized, they’re increasingly adding other features to cater to users' habits. So 84% are location-aware, 74% show current offers, 53% offer a finance calculator, and about a quarter (24%) feature live chat, based on the 42 auto brands surveyed by L2 in June.

At the same time, auto companies are dumping cumbersome features like 360-degree views of cars in favor of others that are better suited to swiping and other gesture-based interactions. That's especially true for tablets, where more than half (57%) of brand sites allow users to swipe the screen, and 47% use touch-friendly elements.

Only a quarter (24%) of auto sites overall are optimized for tablets -- an improvement over just one last year, but still lagging well behind the proportion of smartphone-optimized sites.

“Brands have also attacked technical issues that interrupt or abbreviate the intended site experience. Error rates on complex car configuration utilities are now down to 10% (versus 21% in 2013),” stated the L2 report, which singled out Porsche and Volkswagen for the ease of use and fluid design of their tablet sites.

But L2 found that auto brands still have a lot of work to do when it comes to a mobile search -- which is surprising, since it’s such a fundamental marketing tactic for auto advertisers. Much of the difficulty relates to where a search originates. For example, when a prospective buyer searches in a major metro area, the resulting ads are split evenly between the brand and its dealerships.

But in searches outside of a city center, dealership ads gradually get replaced by ads from third parties -- which account for 12% of the ads in suburban areas and 24% in rural ones. “Only 66% of brands were engaging in SEM across all three environments examined. Of those, 36% did consistently link from their sponsored ad to a dealership locator -- but none referenced geolocal offers or promotions in ad copy,” noted the report.

Auto marketers' attempts to own the digital dashboard with connected car apps have also sputtered. Currently, there are about 30 of these apps from 20 auto brands in the App Store, with three-quarters also offering Android versions. But more than half haven’t been updated since 2012 or before, and average only 2.4 out of 5 stars in user ratings.

With Apple and Google introducing their own connected car platforms, nearly 80% of auto brands have integrated with one or the other of the tech giants’ in-car systems, or both. Apple’s CarPlay boasts IBM, Ferrari, and Mercedes-Benz as partners, while Google’s Open Automotive Alliance includes Acura, Buick, Infiniti and Cadillac.

Helping to drive those initiatives is consumer demand for smartphone-powered controls in cars. The L2 report cited separate research from Nielsen and Deloitte indicating 63% of car buyers are looking for a connected-car, and over half of millennial shoppers want to be able access smartphone apps directly from the dashboard.