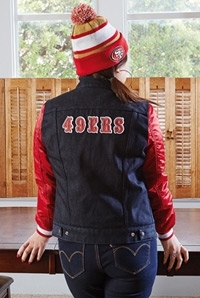 Levi Strauss & Co. is paying the San Francisco 49ers $220 million over 11 years for the naming rights to Levi's Stadium. Now, the denim brand is making sure people know about this sponsorship deal.

Levi's has named full-service creative agency Heat as its lead partner in the activation and marketing campaign for the Levi’s brand at the stadium, responsible for the strategy and execution of Levi’s initiatives that will enhance the game-day experience for 49ers fans and visitors to the Santa Clara, CA stadium.

This comprehensive integrated effort includes print, digital, social, in-stadium, radio, and experiential. Much of the effort kicks off September 14 to coincide with the first home game opener. An experiential Fan Rally event on Thursday will happen at Levi’s Plaza, the corporate campus of Levi’s in San Francisco. After this rally, a similar experience will then head to the Stadium, where it will be integrated with other activities.

“Leveraging our deep expertise in connecting brands to sports culture, we’ll be bringing the Levi’s brand into the hearts of fans by focusing on what matters to the 49ers’ community,” says John Elder, president of Heat. “The emotional highs of the touchdowns, the chants, the trash talk, the tailgate — these are elements of football that we love here at Heat, and that we’ll capitalize on for Levi’s. As an independent agency founded and headquartered in San Francisco, we couldn’t have more pride to work with an iconic San Francisco brand like Levi’s and the new 49ers stadium.”

The Levi’s brand team chose Heat because of the agency’s sports marketing expertise and its extensive knowledge of sports fans. Heat has worked with EA Sports, The NFL Network, and Yahoo! Sports. More recently, the agency received a 2014 Effie for its “Madden Forever” campaign for EA Sports’ Madden NFL 13.