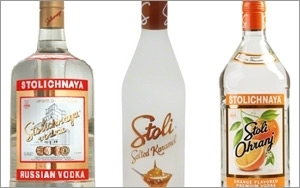 Stoli Vodka is launching the brand's first major advertising effort since the January 2014 inception of the Stoli Group USA, the North American subsidiary of SPI Group.

Developed by Richmond-based The Martin Agency, the campaign conveys what it means to be "THE Vodka" by celebrating the brand's authenticity and heritage for the past 80 years. At the same time, the creative is designed to separate itself from common industry images that promote superficiality, over-designed bottles and over-idealized lifestyles.

"'THE Vodka' campaign firmly supports Stoli's commitment to stay true to our longstanding heritage and unwavering focus on what is the most important—the spirit inside the iconic Stoli bottle," said Lori Tieszen, CMO of Stoli Group USA, "This campaign represents what people crave from their vodka: something authentic; something bold; something real."

And in 2015, a new TV commercial will air nationally.

Digital creative executions will highlight the difference between being one of many versus being an original through an ongoing series of animated videos made specifically for social media. These short, irreverent videos are illustrated by graphic novelist and designer Andrew Rae, and will be released every week through the end of the year.

"One of the best examples of Stoli's authenticity is their iconic label. Unlike the many over-designed vodka bottles you see on shelves today, Stoli has been consistent and stayed true to its character since the beginning," said Jorge Calleja, Global Group Creative Director, The Martin Agency. "We wanted to showcase the iconography that has made Stoli 'THE Vodka' and explore the difference between what it means to be artificial vs. authentic. Do you want to have 'a' night or 'THE' night? Do you want to drink 'a' vodka or 'THE Vodka'?"

The outreach also will take to the streets. This October, Stoli will host a party on Avenue A in New York City's East Village to recognize this area's nightlife culture and how the local community has turned "just a street in the city into 'THE' street." Then, the campaign will continue through 2015 to celebrate nightlife scenes spanning over 10 markets including Los Angeles, Chicago, San Francisco, and Miami.

This campaign is the first under its new agency. Previously, creative agency Berlin Cameron, owned by WPP, handled the account. Stoli is also ramping up its ad spend. While executives decline to disclose its current budget, the brand only spent $485,000 in media spending from January to November 2013, compared to $5.1 million during the same time frame in 2012, according to Kantar Media.