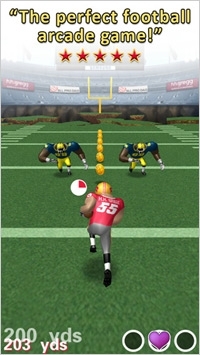 For all the excitement during game play, professional football is filled with downtime, what with the quarter breaks, two-minute warnings, time-outs and replays. Electronics and appliance retailer Hhgregg is looking to keep its hometown fans in Indianapolis interested via an in-stadium live game that continues even as the action on the field lags.

The company recently launched its second season of Endless Blitz, a smartphone app through which game attendees compete against each other for prizes to increase fan engagement.

“Hhgregg and the Indianapolis Colts have a strong partnership which includes in-person and online events that has spanned the last 20 years,” Jeffrey Pearson, senior vice president of marketing at Hhgregg, tells Marketing Daily. “Endless Blitz is an extension of that partnership where we are engaging NFL fans with a mobile experience connected to game day.”

The app, which is available on both Android and iOS platforms, pits players against each other by measuring how far they can go on a limitless football field filled with defenders. As the game is played, the leaderboard at Lucas Oil stadium is updated in real-time. The top three players in every quarter are awarded prizes ranging from an LG HDTV to autographed Colts mini helmets.

New elements this year include playing as Blue, the Colts’ mascot, a special LG-branded power up, and a mini-game called Flippy Football. Having discovered in last year’s launch that downloading an app is difficult when so many people are using the stadium’s WiFi network, the company is promoting the app’s availability prior to upcoming games, Pearson says. There are also other opportunities to play the game in the stadium beyond smartphones.

“We see very heavy usage during game time with people playing on their own devices, and we looked at ways to bring that experience to the crowds during the game,” Pearson says. “We’ve developed the game to run on an Xbox with kinect and brought in iPads so more people can play and the crowd can watch.”

While the partnership is currently only limited to the Indianapolis Colts, Pearson says the retailer is exploring similar opportunities with other teams.