What Does Fido Think? 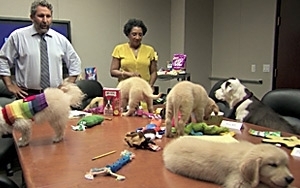 Big Lots sells a wide variety of merchandise ranging from furniture to food. However, instead of broadly promoting low prices or its general brand, the discount retailer and AOR O’Keefe Reinhard & Paul (OKRP) are concentrating on categories. This week, two companies are launching “Pet Focus Group,” a series of digital films to showcase its variety of pet brands, including Purina, American Kennel Club, and Whiskas. The campaign runs across YouTube, Twitter, Facebook and digital media channels.

This campaign follows the launch earlier this year of Big Lots as a Hostess outlet. Since then, the agency has created about four additional campaigns consisting of online films and in-store marketing to promote a variety of seasonal merchandise.

“What’s great about Big Lots is their willingness to experiment with the message as long as we stay true to the brand’s voice,” explained Tom O’Keefe, CEO of OKRP. “The Pet Focus Group films represent another opportunity to share Big Lots product offerings and also to extend awareness of the brand as one that continues to surprise and delight their consumer.”

These campaigns all heavily utilize social media and digital content. “We know our most loyal customers love video content,” explained Andy Stein, Chief Customer Officer at Big Lots. “They watch it on their phone, tablet, TV—in many different ways and places. And we know that they share it with their friends. Part of the idea for Pet Focus Group is to create funny, sharable content that helps elevate people’s perceptions of Big Lots.”

The pet campaign showcases cats and dogs Pork Chop, Boots, Bianca and Tabitha at a roundtable panel as they share their preferences for chew toys, clothing, treats and bowls.

“We realized that instead of scripting this, it would be so much more fun to let pets be pets, and get really good improvisers to react in real time to whatever those animals are doing," says Sue Gillan, Creative Director at OKRP. "And because you have these human facilitators in the room with the pets, they get to do the heavy lifting around uncovering the quality of the products without the event feeling commercialized. The result feels like a genuine discovery of the products.”

However, Big Lots isn't necessarily counting on consumers to promote its brand. Rather, the discount retailer said in an analyst call that it expects its 38,000 store associates to pass its viral videos along to their friends and family members to help spark buzz.

OKRP was named Big Lots' AOR in earlier this year.