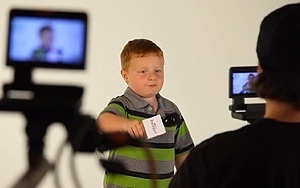 FreshPet got a really, smart five-year old to talk adorable pets in a winning YouTube campaign that drove up the average daily site traffic by 416% since the video launched. About 86% of Web site visitors driven by the video are new to freshpet.com. It's not only the success of the video -- the analytics behind the YouTube campaigns continues to turn Google's video platform into a performance marketing powerhouse.

The star of the video -- Noah Ritter, who wants to become a paleontologist when he grows up -- became an Internet sensation after a live television interview filmed at a Pennsylvania county fair in August. He went on to appear on Good Morning America and The Ellen Show.

Katie Tyson, marketing manager at FreshPet, said it's the company's first foray into digital video. The main goal to drive brand awareness got people talking. "Traditionally we've done that with television, but this year we began focusing on digital," she said, adding that Good Morning America featured a clip.

Tyson estimates the cost to create, produce and run the FreshPet "Apparently Kid" video at about $120,000. Production budgets for broadcast TV would likely have run more than 10 times higher, she said.

YouTube’s net U.S. video ad revenue will reach $1.13 billion in 2014 -- accounting for 18.9% of the U.S. digital video ad market, per eMarketer. Many search on YouTube to find helpful tips, and increasingly are drawn to platforms with exclusively high-quality, well-produced content.

The helpful tips in FreshPet's video initially drove up organic search by more than 400%, as well as visits to the company's Web site. The uptick factors in buzz from the video in the media and broadcast TV. Some retailers selling the product reported record sales that week, though Tyson couldn't tie the video directly to the increase in sales. She working on the attribution model.

Nick Reed, co-founder of ShareAbility, the brains behind the "Apparently Kid" commercial, said there are more spots in the works to drive awareness of the brand to get people talking.

Conversions remain a big piece of the strategy. Tyson said "we're not yet able to correlate it directly to sales, but we are able to use it for a proxy for purchase intent like visits to the Web site and store locator."

The video release date correlated with the highest site traffic for FreshPet in 2014, up 561%. About 56% of U.S. viewers for the commercial were within the target age demographic of age 25 and older. There were more than 250 organic media placements;  35,000 social media shares; and more than 11,000 YouTube Likes.

In fact, the video received 2 million views in the first two days of the release, with more than 3.2 million views to date. The video hit No. 2 globally during the release week of the Apple iPhone 6 announcement. FreshPet's YouTube channel rose to the Top 5 pet food brands on YouTube by subscriber count and Top Overall in traffic and reach. The video lived on YouTube's front page for three days.